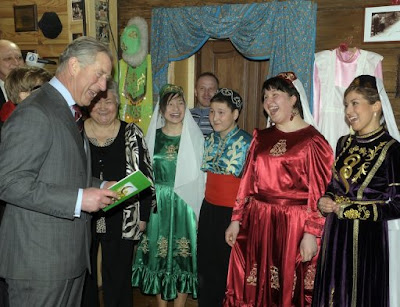 KRUSZYNIANY, Poland — Tucked in a tiny village, the small wooden building looks just like any other house of worship dotted across the Polish countryside.

But three crescents mark it out as a mosque, and a rare footprint of Islam in this overwhelmingly Catholic nation of 38.5 million people.

Kruszyniany is home to the descendants of Muslim Tatars who came here three centuries ago.

The village of 160 people on the Belarussian border played host Tuesday to Britain's Prince Charles, on an official visit to Poland.

The mosque lacks the minaret typical of Islamic architecture.

But there is little need for a muezzin to call the faithful to prayer -- Kruszyniany is now home to just four Tatar families, or 10 people, living among Catholic and Orthodox neighbours.

At the end of World War II, some 300 lived here. Although their community has shrunk over time as youngsters moved away seeking better opportunities, Kruszyniany remains a spiritual home for Poland's 5,000 Tatars.

"We're descended from the Tatars of Kazan, who were the successors of the Tatars of the Golden Horde," said Mustafa Jasinski, proudly, referring to ancestors with roots in Asia.

At 99, he is the oldest member of the community.

He is also the imam of Bialystok, a city of some 295,000 people, 40 kilometres (25 miles) west of Kruszyniany and home to most of Poland's Tatars.

The sermon is in Polish, although the verses of the Koran and the prayers are in Arabic. A curtain separates male and female worshippers.

"The youngsters are at work on Fridays," said Halina Szachidewicz, one of a handful of retirees at a recent service there.

Fellow-worshipper Lila Smolska, in her seventies, added: "I pray in Polish in my heart and recite the prayers in Arabic, the ones our grandparents taught us."

Afterwards she handed out halva made to her grandmother's recipe. The sweet delight, common in the Islamic world, has long been a Polish favourite.

There have been Tatars in Poland since at least the 14th century. Local rulers employed them due to their reputation as fearsome horse-borne warriors.

In 1679, Poland's King Jan Sobieski, lacking money to pay his Tatar troops, awarded them land in an area including Kruszyniany.

In the village cemetery the oldest grave dates to 1699. Visible despite the snow, the headstone is etched in Arabic, the liturgical language of Islam.

The Tatars' tongue was related to Turkish, but it gave way to Polish after intermarriage with locals.

"The Tatars married Polish women, but their children kept to the Muslim religion and Tatar customs," said cemetery-keeper Dzemil Gembicki, 35, whose dark, almond-shaped eyes give away his roots.

"My wife is Catholic, and we decided that our boys will be Muslims and our girls Catholics," said Gembicki, whose spouse is pregnant with their first child.

Tatars from across Poland still chose Kruszyniany as their last resting place, and the graveyard is a visible trace of their adaptation.

On the headstones in Polish, the names mix Islamic tradition and local style. Szachidewicz, for example, with its classic Polish "icz", is derived from "shaheed", Arabic for witness, or martyr, of the faith.

"Other names are typically Polish, taken from a village or the name of a Polish wife," said Gembicki, whose mother's family name Poplawski masked Tatar roots dating back to 1679.

"I feel Polish first, then Tatar, then Muslim," she said.