Imran Khan: Why I believe America created the Pakistan Taliban 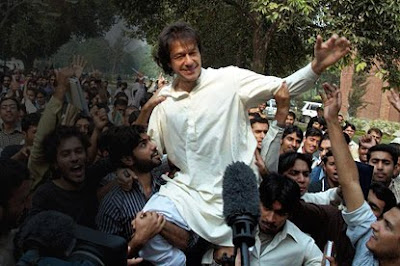 I don't have to do this,” Imran Khan tells me earnestly. “I could have a very easy existence. I could go on TV and make so much money, live like a king.” Instead the retired international cricketer, and former husband of Jemima Khan, has dedicated his life to politics back home in Pakistan. Jemima, the daughter of the late financier, Sir James Goldsmith, may just have bought a £15 million stately pile in Oxfordshire, but Imran lives hand-to-mouth on a farm outside Islamabad. He grows his own vegetables and tends cows on his land in the foothills of the Himalayas.

Since he founded his party, Tehreek-e-Insaf (the Movement for Justice), in 1996 on an anti-corruption platform, he has campaigned against the elite hogging all the resources. He personally sold all his cricketing memorabilia to fund a cancer hospital in memory of his mother, who died of the disease, and he has opened a vocational college in a poverty-stricken area of Pakistan.

Imran, 57, took nothing from Jemima's fortune when they divorced, so when he runs out of money he does a brief stint as a TV pundit. But he is completely unmaterialistic. “You achieve inner peace when you give away what you have,” he says.

This week he is in London to talk about the crisis in Pakistan, but he has never liked city life. His parents used to take him up in the hills each summer as a boy, and now he takes his sons Sulaiman, 13, and Kasim, 10, hiking and shooting partridge when they visit his farm. He has built them a mini-cricket ground. “They are quite good,” he laughs.

Gone is the handsome playboy who spent his nights in Annabel's and squired gorgeous women, including Susannah Constantine and painter Emma Sergeant, around town. He still has those patrician looks but these days Imran would rather stay up all night talking politics than nightclubbing.

Last week I watched him give a talk to students in London. Mostly bright, politicised young Pakistani-Muslims, they treated him like a rock star. His sense of urgency was palpable, as is his fear that Pakistan might implode at any minute.

Already, it is routinely described as a “failed state”. From day one he opposed the War on Terror and “the American puppet politicians in Pakistan”. The decision to send the army into the tribal areas of the North West Frontier, to flush out al Qaeda terrorists, simply fuelled extremism. “It's civil war in the making,” he says shaking his head. “They were like a bull in a china shop, fighting one or two guerrillas with aerial bombing of villages. That turned people against the army and a new phenomenon was created: the Pakistan Taliban.” It's made him believe even more passionately in socio-economic justice. “You will have no problem with extremists in Pakistan if you have democracy with a welfare state,” he tells the audience.

By the end of the evening he looked shattered. Half his life is spent in transit and his close friend tells me he is wearing jeans instead of the usual suit because he forgot to pack a belt.
When I meet him two days later at Ormeley Lodge, near Richmond Park, he is still fielding calls about a wave of bombings in Pakistan, and trying to have high tea with his sons. The Georgian childhood home of his former wife is where Imran stays whenever he is in London, as a guest of her mother, Lady Annabel Goldsmith. The wing where we meet is modest: with a pool table and well-worn sofas.

He speaks cordially — if carefully —about his ex-wife. “It's a very tricky thing, divorce, and toughest on the children. But as divorces go, ours has been the most amicable. The anger and bitterness comes when there is infidelity. But there was no infidelity,” he says firmly. “I realised her unhappiness in Pakistan and she, after trying her best, found she just couldn't live there. So that's why it ended, it was just a geographical problem, and we couldn't sustain a marriage like that. If you care for someone you don't want to see them unhappy. My connection with the Goldsmith household is just as it's always been. They [Jemima's siblings, Zac and Ben] are like my younger brothers. And Annabel is as close to me.”

His marriage suffered because of his political zeal — he didn't stand in the 2007 election, arguing that there could be no democracy while the judges were still controlled by the ruling party. But now politics is a mission for him, not a career. “If someone offered me a political career, I would shoot myself. Having to get votes through making compromises, no thank you.
“The classic example in England is Tony Blair.

How did the people go wrong with him lying all the way? He sold the idea that there were weapons of mass destruction. If there had been conscientious politicians in your assembly who weren't worried about their political careers, he would never have got away with it.”
Many people think his involvement in politics is a way to keep alight the adulation he craved as a cricketer, but after leaving Aitchison College in Lahore (the equivalent of Eton), he studied politics at Keble College, Oxford. Former cricketing colleagues — Imran played for Worcestershire and Sussex — recall an intense young man who hated pubs (as a Muslim he doesn't drink) and public speaking. He returned to cricket once more at the World Cup in 1992, aged 39 when he captained Pakistan to victory.

But his spiritual awakening had come in his early thirties after witnessing his mother's agonising death from cancer, without access to proper treatment and painkilling drugs. “She was in such agony that after she passed away I had to consciously discipline myself to shut out the memory of her pain.”

He consulted a mystic who “made me realise I had a responsibility to society because I was given so much. It created selflessness”. Imran approached Pakistan's richest men — many had been schoolfriends — for help in raising
£25 million to build a cancer hospital, but quickly learned that wealth and generosity don't always go hand in hand. Instead, he took to an open jeep and toured 29 cities in six weeks, asking ordinary people for help. “In those six weeks I changed. I realised the generosity of tea boys, taxi drivers, the poorest people bringing 10 rupee notes — and also their faith. I collected £14 million in those six weeks.” Today the hospital treats 70 per cent of patients for free.

Although the dictatorial president, Pervez Musharraf, resigned in 2008, Imran has no faith in the current “democratic” government, now headed by Asif Ali Zardari, the widower of Benazir Bhutto. Imran talks passionately about how the rich in Pakistan travel by jet and have tax-evading bank accounts in Switzerland.

He may insist that support for his Movement for Justice party is growing, but the truth is he is still perceived as a maverick outsider. And his romantic past hasn't helped. Conservative voters bring up the love child with Sita White (Imran has never publicly acknowledged Tyrian, now 17, as his daughter; but since her mother died in 2004, he has been involved in her upbringing). And of course there's his marriage to Jemima, a half-Jewish, half Catholic heiress.

Despite converting to Islam and learning Urdu, Jemima — 20 years Imran's junior and still at university when they met — was accused (falsely) of trying to smuggle antique tiles out of Pakistan. The final straw, says Imran, was in 2002 when she was accused of studying under “the blasphemer Salman Rushdie” because his book, The Satanic Verses, had appeared on her university reading list. Protesters torched posters of Jemima. “She was really shaken up by that and moved to England, so that was a big crisis for me.”

Two years later the marriage ended. Jemima has continued to impress as Unicef special representative — and a passionate advocate for democracy in Pakistan. “Frankly I never understood the media image of her as a socialite,” Imran tells me. “I never thought she would fit into that role because she's very bright, she's very political.”

But then Imran is a mass of contradictions himself. In the past, he has argued that the pressure on women to work has contributed to the breakdown of society in the West: “My mother was the biggest influence on my life, a proper mother.” Yet he believes that “a woman should be able to reach her full potential”, and he set up his university in a remote, conservative part of Pakistan precisely so local women could get an education for the first time in the region's history. And he reminds me his three sisters are high-powered career women with children.

Pakistan is Imran's passion and he feels little nostalgia for London — except as the place where his sons live: “Fatherhood has given me the greatest pleasure in my life. And hence it was very painful, the divorce, because that [being separated from them] was the main aspect. But I am basically a goal-orientated person, it's never been about making money or a job. My passion is there so I only come to England to see my children.”

Imran has a core group of friends he has known for 40 years here. Setting up this interview, I came across a devoted group of Londoners — from lecturers to hairdressers — who give up time and money to support his party. “They know I do not have to do this, that it's a big personal sacrifice,” he says.

He finds it desperately sad that he has to defend being a Muslim. “The most important thing to understand is what's happening in Pakistan, and this war on terror is not a religious issue, it's a political issue.” No religion allows terrorism, Imran insists, but “people pushed into desperate situations will do desperate acts”.

It doesn't make him popular. He's been dubbed a Taliban supporter by the same enemies who once called him a Zionist sympathiser. Critics say his politics are idealistic and unworkable in a country bailed out of chaos periodically by military regimes, but Imran insists democracy can be a street movement: “Yes there's a fear, will Pakistan survive? But in a way it's very encouraging because you can see the politicisation of the youth. That's how it starts, in the campuses. Sixty-five per cent of Pakistanis are below the age of 25.”

This probably explains why four days ago, with the help of Jemima, Imran set up his own Twitter page. Back home, he says current affairs programmes get higher ratings than Big Brother.

“Our Paxmans are the most watched in Pakistan today.” Is he handing over the baton? He smiles wearily. “Basically I want the young to come in and upset the whole equation.”