India's 'modern-day Nero' to be grilled over Muslim bloodbath 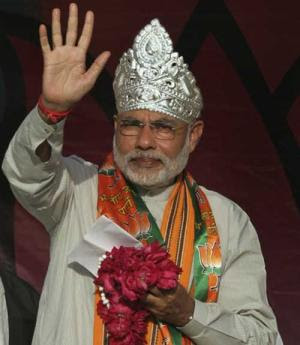 With his face gazing from posters celebrating the 600th anniversary of the founding of this historic city, Narendra Modi – chief minister of the Indian state of Gujarat – likes to present himself as a man of destiny. Yet slowly but surely history may be catching up with India's most controversial politician.

Eight years after perhaps the worst episode of religious violence since Partition, a frenzy of brutality in which hundreds of Muslims were raped and murdered by sword-wielding mobs, the slow-turning wheels of Indian justice have finally stopped outside Mr Modi's door. A special investigation team set up by the country's Supreme Court has summoned him to appear and answer allegations that he should be held responsible for the violence.

"He has been summoned to appear from the week starting this Sunday," confirmed the inquiry's head, RK Raghavan. "[As to whether he appears] your guess is as good as mine."

No one alleges Mr Modi, a member of the right-wing, Hindu nationalist Bharatiya Janata Party (BJP), personally took part in the wave of killings that engulfed several Gujarati cities in the spring of 2002, an orgy of violence triggered by the deaths of dozens of Hindu activists in a train fire. But it is said that at the very least he did insufficient to stop it, even when he was contacted by those whose lives were fatally threatened. Others say he actively seized on the violence for political reasons and allowed it to burn for several days. He has always denied the allegations.

One man who says he can prove Mr Modi's guilt is Imtiyaz Pathan. The 33-year-old electrician survived a singularly notorious incident of the slaughter after a Hindu mob surrounded a Muslim apartment compound called the Gulbarg Society in the east of Ahmedabad. Anywhere up to 70 people were killed after they sought refuge in the home of a Muslim former MP, Ehsan Jafri. The mob laid siege to the house with firebombs, rocks and an assortment of weapons for up to seven hours before the police – their office barely a mile away – arrived. Many of the bodies of those killed that day, including that of Mr Jafri, who gave himself up to the mob to try to "buy" the safety of his neighbours, were never found.

Earlier this week, Mr Pathan, accompanied by his government-appointed police guard carrying an ageing .303 Lee Enfield rifle, led The Independent through the ruins of the now largely abandoned housing block, the walls of many of the wrecked buildings still blackened by the fires set that day. Several members of his family were killed, including his mother. As he crossed the threshold into Mr Jafri's building, he pointed to the spot where his great grandfather was hacked to death. "Being here brings back the whole thing," said Mr Pathan.

Crucially, Mr Pathan has testified he was present when the MP made a series of increasingly desperate calls for help, both to the local police and officials. As the rain of petrol and acid bombs being hurled at the three-storey house continued, Mr Jafri knew someone had to rescue them or else everyone would die. Finally the 72-year-old called Mr Modi directly. "After calling Modi, Jafri was totally depressed," said Mr Pathan. "When I asked him what happened, Jafri said 'There will be no deployment [of police].' In fact, he said that Modi had abused him, that he had used abusive language."

Rupa Mody was also present that day. Like Mr Pathan, she and her two young children took refuge inside Mr Jafri's house. She and her daughter, now aged 11, survived the violence but her teenage son, Azar, become separated. The last time she saw him was as he warned her not to reach out and try to lock a metal gate because the mob would cut off her hand.

In her small, neat apartment, Mrs Mody said she still refused to believe Azar was dead, hoping against the odds for a miracle. She and her husband wept as they passed round the family photo album, displaying carefree images of family trips and religious festivals. "Modi is a powerful man. He could get anything done," she said. "Now we are following the legal course. Let's see what comes of it."

It remains unclear what damage, if any, the inquiry will inflict on Mr Modi, who has been twice re-elected since coming to office in 2001 as the state's chief minister and who has sometimes been mentioned as a possible future prime minister of India. Indeed, with no small irony, in both his re-election campaigns, the 59-year-old has projected himself as someone capable of protecting Gujarat against "terrorism". While never specifically attacking Muslims, he has wrapped himself in the orange robes of Hindu nationalism.

He and his advisers have also projected him as a man who can do business and someone capable of pushing the development of Gujarat. Many say he has also encouraged a cult of personality, controlled with a firmness that borders on the authoritarian. Not only did Mr Modi refuse to be interviewed but his spokesman declined to comment or answer written questions, and both personal friends and senior members of his party refused to speak without his permission.

One of those quick to give credit to the chief minister was Rupesh Shah, president of the Gujarat Chamber of Commerce and Industry. He said that for 10 years the state had enjoyed doubled-digit growth that was comparable to that of China and that Mr Modi has overseen an expansion of electricity generation, infrastructure and higher education facilities.

"He has also provided safety. Since Modi has come to power – forget about 2002 – there has not been a single incident of religious violence for seven-and-a-half years," he said. "Today, a Muslim is more safe here than anywhere else in India. The average Muslim's income is double that anywhere else." The minister has certainly been quick to embrace India's major industries and has in return received warm words from many of its major tycoons, including Ratan Tata, who switched production of his 100,000 rupee Nano car to Gujarat after running into a labour dispute in West Bengal. Anil Ambani, one of the country's richest industrialists, last year said at a conference in Gujarat: "[Modi] has done good for Gujarat and what will happen if he leads the nation?"

Analysts say that Mr Modi's success has come from selling himself, with a deft gift for slogans and public rhetoric, to the state's growing affluent consumers. While the media in Gujarat might grumble about his authoritarian manner and readiness to launch legal actions, the middle-class appears less concerned. He is basically supported by the middle class," said analyst Achyut Yagnik. "The rise of Modi is a reflection of the rise of the Gujarati middle-class."

It is unclear where the questioning of Mr Modi will lead. The inquiry itself has already been rocked by controversy with its lead prosecutor last month resigning and complaining that some police officers involved were deliberately altering evidence to "protect some of those accused".

Others think it is at least progress that Mr Modi is being questioned, though they say questions alone are not enough. Tanveer Jafri, son of the murdered politician who gave his life trying to save his neighbours, said: "This will be a whitewash unless charges are brought."

The Gujarat Riots broke out following the death of 58 Hindu activists and pilgrims following a fire that swept through the Sabarmarti Express while the train was stopped at the city of Godhra on 27 February 2002.

It was alleged that the inferno was started by a gang of Muslims, but subsequent investigations suggested it was a cooking fire incident. Among those killed were 20 children. Word spread that Muslims had caused the deaths and that they had stockpiled petrol to hurl at the train. Across the state, Hindu groups announced that the following day they would enforce a strike, or "bandh", in protest.

The backlash was swift. In more than 150 towns and almost 1,000 villages, violence erupted, overwhelmingly Hindu attacks on Muslim communi- ties. While there are some reports of Muslims attacking Hindus, few dispute that most victims were members of the minority community that make up 10 per cent of the state's population. The official death toll said 790 Muslims and 254 Hindus were killed, though a number of rights groups estimate the toll at double that. The Indian Supreme Court likened Mr Modi to a "modern-day Nero", while the US government refused him a visa on the grounds that he had "violated religious freedom".

In 2007, an investigation by the magazine Tehelka claimed that Mr Modi had approved of the killings. Using hidden cameras, it quoted Haresh Batt, at the time the leader of a fundamentalist Hindu organisation, as saying: "[Modi] had given us three days to do whatever we could."