The battle goes on, though men often object—and sometimes women too 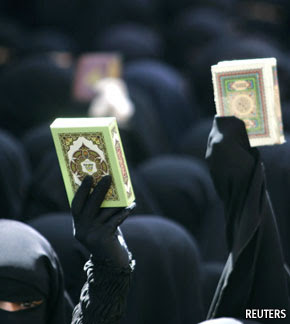 THE sight of hundreds of women cheering a proposed law banning child marriage, as they did on March 22nd in the Yemeni capital, Sana’a, was hardly amazing. No country has escaped the global trend towards greater equality between the sexes, not even one as poor and tradition-bound as Yemen, where half of girls are married off before the age of 18 and many even before the age of 10. Yet the day before that demonstration even more women (pictured), nearly all wearing full face veils, gathered at the same spot to denounce the law as an imposition of unIslamic, Western values.

Arab women have made huge if uneven strides since the issue of their rights arose a hundred years ago. Female education, for instance, was once virtually unknown. Today, even in arch-conservative Saudi Arabia, two-thirds of university students are women. But still, among 134 countries in the latest Global Gender Gap Report prepared by the Swiss-based World Economic Forum, a survey that measures opportunity for women in education, health, business and politics, all 14 of the Arab countries that were included ranked in the bottom 30.

Not surprisingly, Yemen came last of all. But the clashing demonstrations in its capital illustrated an important aspect of the Arabs’ lag in women’s rights. Quite often the obstacles to their progress have been not just ill-educated male chauvinists and conservative clerics. Women themselves have also stood in the way.

In the relatively liberal and rich emirate of Kuwait, for instance, women got the right to vote five years ago and won their first seats in parliament last year. But to get there, reformists found themselves battling not only against apathy among many women but even deep-seated female hostility. By contrast Syria, long secular under the Baath party’s rule, denies political rights without sexual discrimination. But veiling and other forms of pious ostentation among women have recently returned, largely because of groups such as the Qubaysiyat, an all-female Islamist society which has schools, nurseries and mosques that now attract many of the Syrian elite.

Egyptian women, who fought to drop their veils in the 1920s and have voted since 1956, have made very slow progress ever since. Many retain deeply traditional outlooks. A survey in 2009 of 15,000 Egyptian youths, for instance, found that 67% of female respondents believe that a husband is justified in beating his wife if she speaks to another man. By contrast, a recent initiative by Egypt’s government to appoint female judges roused little general protest. But fellow members of Egypt’s ostensibly secular judiciary have proved harder to convince. Last month some 334 out of 380 judges on the state council, a grand body that adjudicates cases between individuals and the state, voted against accepting female members. The matter is still pending. Egypt’s supreme court has now ruled in favour of women judges but deferred a final decision to yet another all-male panel.

So the bigger share of blame for Arab women’s slow progress still lies with the usual suspects, namely men. Saudi Arabia recently ruled that female lawyers may actually appear in court. But the concession was heavily qualified. Women will be able only to represent women—and only in family cases.

Email ThisBlogThis!Share to TwitterShare to FacebookShare to Pinterest
Labels: Islam and Muslims, Women