Sky is the limit for Pakistan’s women fighter pilots 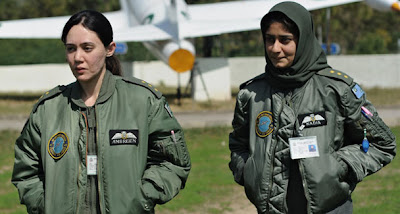 ISLAMABAD: Ambreen made Pakistani history by becoming one of the country’s first female fighter pilots, but on Sunday she was due to swap her flight schedule for an arranged marriage.

“It’s all set and planned, but I haven’t talked to him,” she admits, her face scrubbed clean and wearing a Pakistan Air Force (PAF) jumpsuit – a far cry from the make-up and ornate gown she’ll wear for the wedding.

The wedding between Flight Lieutenant Ambreen Gul, 25, and an engineer from Islamabad has been arranged by their families in the best Pakistani tradition.

When she wakes up on Monday – International Women’s Day – she’ll be married to a man she has only seen once before and with whom she has barely exchanged a word.

Pakistan is a conservative Muslim country, where the United Nations says only 40 per cent of adult women are literate. Women are victims of violence and abuse, and the country still lacks a law against domestic violence.

But in 2006, seven women broke into one of Pakistan’s most exclusive male clubs to graduate as fighter pilots – perhaps the most prestigious job in the military and for six decades closed to the fairer sex.

Ambreen’s company manager father was delighted. Ironically it was her housewife mother who initially feared her daughter would bring shame on the family.

“It was because of our eastern culture. She thought people would say, ‘Why are you letting your daughter go out of the home?’

She and 26-year-old Flight Lieutenant Nadia Gul say PAF is a trailblazer for women’s rights. As respected officers with a 60,000-rupee-a-month salary, they are living out their dreams.

“It’s a profession of passion. One has to be extremely motivated. I love flying. I love to fly fighter jets, to do something for my country that is very unique,” smiled Ambreen, her hair stuffed into a pony tail.

Signing up aged 18, only a handful of girls beat homesickness and stiff competition to pass a six-month selection process and graduate after three-and-a-half years of training.

“It was the toughest time we’ve ever faced,” Ambreen remembers.

During a training flight on a Chinese-made F-7, she once blacked out for a few seconds before survival reflexes kicked in.

Nadia, whose army captain husband is serving on the front line of Pakistan’s war against the Taliban in the mountains of Swat, won a prize for academic achievement at PAF’s first women fighter pilot graduation.

“It was the first time. It was history,” she remembers, a bottle-green hijab covering most of her hair and tucked into her padded pilot’s jacket.

“I was just a girl who went to college and came back home, but now I’m in a great profession,” said Nadia.

Commanding male subordinates, they bat aside any question of sexism or men who don’t take kindly to being ordered about by a woman.

They love the respect that comes with official fighter pilot status in the armed.

Forbes ranked Pakistan in 2010 as the fourth most dangerous country in the world. Officers say only a tiny elite – and no women – actually fly in combat in Pakistan’s tribal belt, a battleground against Al-Qaeda and the Taliban.

While PAF is outwardly very proud of its women pilots, some wonder privately whether women are strong enough to reach the top of the profession.

But flying transport and cargo planes, ferrying VIPs like cabinet ministers around the country, Nadia feels women’s lot is improving and takes issue with Western perceptions of Pakistan as backward.

“PAF are giving us this chance on an equal basis. It was really a bold step that the Pakistan Air Force has taken in recruiting lady fighter pilots,” she said.

In a country where extended family is important and most middle-class women rely on servants for household work and child-minding, Ambreen and Nadia may be saved some of the problems faced by women in the West.

They believe marriage and – in the future – motherhood can complement, not replace, a career, “provided you have a supportive family.”