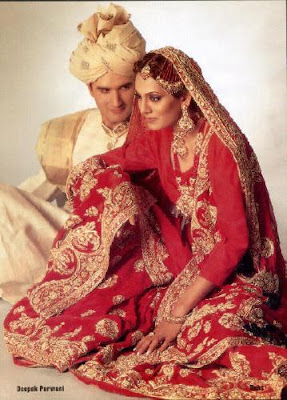 I was intrigued by the experience of Ayesha Nasir who writes about how she and many other women of her aquaintance did not read their Islamic marriage contracts.Islam gives women full rights to negotiate many terms in the marriage contracts and even demand the amount of 'mehr' they wish to receive. However this almost never happens in the marriages of the South Asian Muslim community. Negotiation, if any, is restricted to fathers, brothers and uncles meanwhile brides are almost never given the opportunity to read their own marraige contracts or have any sort of say on the amount of the 'mehr'. The 'mehr' is also often just a token amount, asking too much may offend the grooms family and lead to accusations of greed. Meanwhile it is perfectly acceptable for the grooms family ask for large amounts of money or expensive items in the brides 'trousseau'.

Ayesha mentions that while her husband ofcourse is briefed by the religious scholar in attendance and reads the marriage contract in detail, making additions and cancellations, he is hurt by her request to want to see it, she is also rebuffed by her own family.

'My grandmother, the stern matriarch of our family, warned me with a scowl that to read the contract would be a bad omen. But I was still eager to see the papers and began bugging my father. He initially consented, but eventually pulled back, saying he didn't want my husband's family to take offense. I burst into tears. My father patted me on the head, whispered consoling words, and said I should trust him.'

While it may well be true that the bride can rely on the male members of her family to ensure her rights in the 'Nikah nama' in such a situation the upper hand is with the groom's family and the bride's family may remain quiet out of politeness and not wish to cause a fuss. No one wishes to be too vocal on behalf of their daughter and offend the all powerful 'ladke wale'(boy's side) who are after all graciously accepting their daughter as part of the family.

This is a sorry state of affairs, due to patriarchal cultural traditions women are being denied a very basic right to have a say or even read their own marriage contract.

Indeed her experience of her marriage ceremony was also quite similar to my own.

'And so, during the ceremony, I sat a mile away from my fiance, could barely hear the words being recited, and felt as removed from the proceedings as a guest. I heard the microphone being passed to my husband. I heard him say "yes" three times, as is the tradition in Islam. I heard a round of congratulations. When my mother engulfed me in a tight hug, I protested that I had no idea what was happening.'

Surely brides should be allowed to be more active participants in their own marriages!
Posted by Zafar Khan at 19:44