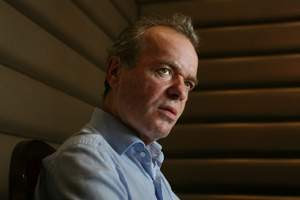 The British author Martin Amis has come close to apologising for his strong views on the Muslim faith.

It came in a staged discussion at the International Festival of Literature this week in Dubai.

Four years ago, Amis said in an interview about terrorism: “There is a definite urge to say, ‘The Muslim community will have to suffer until it gets its house in order’.

“Not letting them travel. Deportation further down the road. Curtailing of freedoms. Strip searching people who look like they’re from the Middle East or from Pakistan. Discriminatory stuff, until it hurts the whole community and they start getting tough with their children.”

His comments, following a terrorist attack in London that killed 52 people, caused outrage among British Muslims and criticism from academics.

But at this week’s festival, the 60-year-old author, whose books include Money and London Fields, seemed somewhat penitent.

He said: “It was a rash remark made at a terrible time. Ten years on from September 2001, we have still not got a usable word for what we mean. People think you are talking about Islam but you are not.

“‘Islamism’ is hopeless because it has got too many letters in common with Islam. I suggest we call it al Qa’eda.”

Amis has long courted controversy with his invectives against the Muslim faith and its followers. At the Cheltenham Literature Festival in Britain in 2007, he said Muslim states were less “civilised” than western society, adding: “Some societies are just more evolved than others.”

To explain his comments, he appeared on Channel 4 News in Britain to declare: “I feel morally superior to Islamists by some distance. There are great problems with Islam. The Quran recommends the beating of women. The anti-Semites, the psychotic misogynists and the homophobes are the Islamists.”

In Dubai this week, he said his definition of Islamists had been misinterpreted. “What I said was that there was an urge. No one can tell me that there was not,” he said.

“By the next day, I had changed my mind because that is collective punishment, but people were saying that.

“More than 95 per cent of Muslims are horrified by this ridiculous, nihilistic wing and should not be connected verbally or otherwise with these extremists.”

Amis said he “respected Mohammed, not Mohammed Atta”, referring to one of the September 11, 2001, attackers.

He was in discussion with the author and broadcaster Paul Blezard, who joked that there had been a sweepstake on how long Amis would be detained by immigration when he flew into Dubai.

Amis replied: “I have met with nothing but extreme courtesy in this country.”