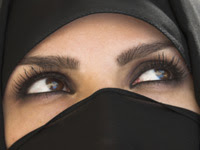 
The tension between gender equality and religious rights has flared into political debate again with two new rulings by Quebec's human-rights commission on the right to wear the niqab and the hijab.

A woman wearing the niqab cannot demand to be served by another woman when dealing with the Quebec Health Insurance Board, the commission ruled. Concluding that religious beliefs cannot stand in the way of gender equality, the commission found that when a woman wearing the Islamic face covering is required to identify herself and proceed with the photo session needed to produce a health insurance card, the Health Insurance Board has no obligation to accommodate her request to be served by a woman.

"Since freedom of religion was not significantly undermined, there is no obligation to grant an accommodation," the order states.

The health board had previously agreed to such requests. But last fall critics argued that the health board was acceding to religious fundamentalism.

The decision was greeted with approval in Quebec's National Assembly yesterday by MNAs of all political stripes.

"I am against the veil. I don't think the veil represents anything more than a symbol of submission of women to religious authorities," said Amir Khadir, an Iranian-born Muslim and Quebec Solidaire MNA.

Immigration Minister Yolande James suggested the ruling will form the basis of new guidelines on religious accommodation for public services, following on the action taken last week to bar a woman from attending a free French language class for immigrants unless she agreed to take off her niqab.

Another decision issued yesterday by the commission involved a client who refused to be served by a health board employee wearing a hijab - a traditional headscarf that does not cover the face.

The commission ruled that the garment had no bearing on the delivery of services and should be allowed to be worn. The incident reflected more a clash of values rather than an infringement on the client's freedom of religion or conscious, the commission stated.

"It cannot be concluded that the neutrality of the public institution was called into question because the service being delivered remained neutral."

The breadth of the debate over "reasonable accommodation" was reflected in a letter signed by more than 100 Quebec intellectuals and published yesterday in the Montreal daily Le Devoir. The letter argued that secular values should be enforced with no exception throughout the public service. The group argued that the time has come for Quebec to enforce its belief in a pluralist society by banning religious symbols from the public service - including the crucifix in the National Assembly.