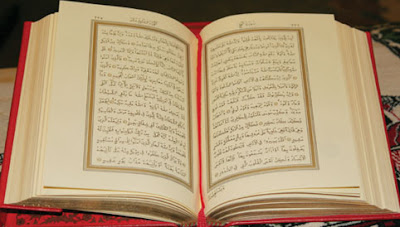 Qur'an is supposed to be read with understanding and there are quite a few passages that exhorts us to read and understand Qur'an:

[Will they not reflect upon the Qur'an? If it had been from other than Allah they would have found therein many contradictions] (An-Nisaa' 4:82) and [Will they not meditate on the Qur'an, or are there locks on their hearts?](Muhammad 47:24).

[(This is) a Book that We have sent down to you, full of blessing, that they may reflect upon its signs, and that men of understanding may remember] (Saad 38:29).

There was this Interesting article in The Guardian by Usama Hasan:

When I first participated in electronic discussions about religion as an undergraduate about 20 years ago, I began all my posts with, "In the name of God." This was the standard translation of bismillah, a phrase that prefixes all 114 chapters of the Qur'an bar one, and by which Muslims start all kinds of daily activities, including work, eating, travelling and making love. (Queen employed the phrase in their Bohemian Rhapsody, of course.) One of the other students responded with, "In the name of myself, since I can't speak for God … " Whilst other colleagues asked him to apologise, fearing that another humourless Muslim would be offended and disengage, I was creased with laughter. But I took his point, and ever since that exchange I have tended to use the prayer-like "With the name of God" for my own correspondence, reserving "In the name of God" for translations of the Qur'an. This illustrates the difficulty of dealing with nuanced religious texts.

The 9th-century inquisition launched by the otherwise-enlightened rationalist caliphs at Baghdad against traditionalist theologians hinged on the nature of the Qur'an: the traditionalists maintained that the Arabic Qur'an was the literal, uncreated word of God, whilst the rationalists argued that it was created, fearing that a pre-eternal Qur'an was an Islamic equivalent of the divine Jesus of the trinity. The later Ash'ari school attempted a compromise by saying that the word of God was manifested at different levels, including those of the Arabic Qur'an as well as its meta-lingual meaning known to God within himself, a sort of divine "mentalese", to borrow a term popularised by Stephen Pinker and other modern linguists.

Language is a vehicle of meanings, and one of the arguments cited to support the disputed existence of mentalese, in which we allegedly think, is precisely the possibility of translation between languages.

The success of Arabic as the lingua franca of the Islamic world meant that the first complete translation of the Qur'an into Persian came over a millennium after the Islamisation of Persia and was by Shah Waliullah of Delhi (1703-1762), two of whose sons completed the first Urdu translation. Some of Shah Waliullah's narrow-minded contemporaries branded him a heretic for daring to translate the Qur'an: they said he was claiming to know all its meanings in order to do this.

Good translations necessarily try to incorporate insights from the centuries of tafsir, or Qur'an-commentary. Tafsir is divided into four broad categories: (i) traditional, on the basis of authority; (ii) rational, often with strong linguistic analysis; (iii) legal, devoted to jurisprudence; (iv) mystical, devoted to inner and spiritual meanings.

The most popular English translations today are the 20th-century efforts of Abdullah Yusuf Ali (a very British Indian), Muhammad Marmaduke Pickthall (a pro-Ottoman Englishman) and Muhammad Asad (born Leopold Weiss, an Austrian Jew). Ali and Asad both provide brief commentaries as well, which together cover all four categories given above to some extent.

As an example, take the story about an Israelite fishing village tested by its local fish only coming near on the Sabbath (2:65, 5:60, 7:163-167). Some of the villagers fished indirectly on the Sabbath and thus mocked the law by sticking to its letter whilst violating its spirit. They were punished by "becoming apes and pigs". The traditional commentary is that they were literally transformed into lower animals. However, Asad follows the rationalist commentators and has them becoming like apes and pigs, ie losing their intellectual capacities and becoming dominated by greed.

There is a real need for mystical and spiritual commentaries to be made more widely-available, especially as contemporary Islam is often dominated by dry, legalistic interpretations. A master of all four types of commentary was the 19th-century chief scholar of Baghdad, al-Alusi, who wrote the voluminous tafsir called Ruh al-Ma'ani (The Spirit of the Meanings). He often gives the spiritual commentary after covering the more obvious explanations. For example, Moses asks his followers to enter the Holy Land, but they lack the ambition and courage to fight the tyrants who rule there (5:20-26). For Alusi, the deepest meaning of this passage is that we are supposed to discover the holiest precincts of our hearts, but most of us are too lazy to combat the tyrannical qualities, such as selfishness and envy, that prevent us from doing so.

Finally, I agree with Salem Azzam's statement at the World of Islam Festival in 1976, "The best translation of the Qur'an is in the language of action." Thus, a short chapter such as Neighbourly Needs (107) would be translated through faith and care for orphans and the needy, favouring sincerity over religious ostentation and generosity over miserliness.

Email ThisBlogThis!Share to TwitterShare to FacebookShare to Pinterest
Labels: Quran