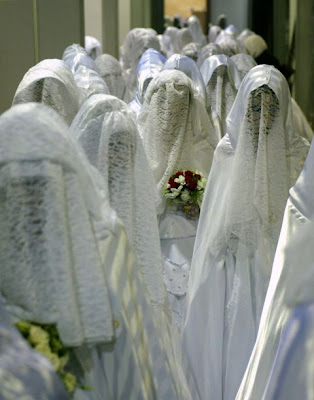 Over the centuries, Muslim scholars and men have accepted polygamy, the practice of having multiple wives, but the Qur’anic permission and the context have been lost. In the Qur’an, polygamy is never discussed in terms of men’s rights, but instead in terms of the needs of women and children at the time.

In fact, it is mentioned in verses 4:3, 4:127 and 4:129 of the fourth chapter of the Qur’an, notably entitled An-Nisa' – the Arabic word for women. Much of this chapter was revealed in the fourth year of migration of the fledging Muslim community from Mecca to Medina, circa 627 CE, and marks the start of the Muslim calendar. It builds on the preceding chapter regarding the Battle of Uhud between early Muslims and the inhabitants of Mecca in which many Muslim men were killed, leaving widows and orphans.

This is the context which is crucial to any discussion of polygamy in Islam, as permission was granted to men under these specific conditions. Polygamy was allowed in verse 4:3 because of God’s concern for the welfare of women and orphans who were left without husbands and fathers who died fighting for the Prophet and for Islam.

When it came to orphans, God suggested, “If you fear that you cannot do justice to orphans, marry such women as seem good to you, two, or three or four, but if you fear that you will not do justice then marry only one….” This solution was to provide some protection for vulnerable women and children in a patriarchal society, so long as all wives received equal, fair treatment.

But in verse 129, God suggested that the possibility for equal, faire treatment is unlikely: “And it will not be within your power to treat your wives with equal fairness, however much you may desire it…”

Incredibly, verse 129 is largely ignored and verse 3 is used by some Muslims to justify plural marriages for men, as if the verses are about men’s sexual needs rather than about the welfare of widows and orphans.

Scholars, such as the 19th century Egyptian jurist Muhammad Abduh and the contemporary Indian Islamic scholar Asghar Ali Engineer, reject the argument that men’s sexual lust should be satisfied by multiple wives, or indeed that men’s and women’s rights to sexual satisfaction differ.

Yet some men use the example of the Prophet’s multiple wives as justification for their own polygamy. But Muhammad had only one wife for 25 years. Only after her death did he enter into concurrent marriages, most of which were political moves to cement relationships with other tribes.

However, one powerful hadith (saying of the Prophet) describes the reaction of the Prophet on hearing that his cousin and son-in-law, Ali – married to his daughter Fatima – was considering taking a second wife. The Prophet was so angered he announced publicly that if Ali wanted a second wife, he would have to divorce Fatima first.

Over the centuries, the Qur’an has been almost exclusively interpreted by male scholars, and though many have been well-meaning and learned, they have reflected their own times, cultures and assumptions.

Fortunately today many scholars, such as Engineer, conclude that “polygamy was contextual, and monogamy is the norm” for our times. Some countries, such as Tunisia, have based their laws on this understanding.

The Qur’an’s message is eternal, but understandably the context has changed, and there are examples of the evolutionary teachings of the Qur’an.

For example, slavery existed for a long time within Muslim communities. It is true that most slaves were those taken in war, but slaves they still were. The Qur’an teaches kind behaviour towards slaves and encouraged freeing slaves as an act of charity, but did not eradicate slavery. Yet today, no Muslim would justify slavery.

Muslims, both men and women, must understand the restricted contextual permission for polygamy. It is not a God-given right for Muslim men and in today’s context it no longer applies as a means of protecting women or providing for them.


*Alia Hogben is Executive Director of the Canadian Council of Muslim Women (CCMW). This article was written for the Common Ground News Service (CGNews).
Posted by Zafar Khan at 17:15