Wilders goes for headscarf ban in the Hague 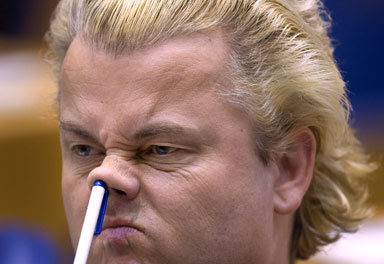 A ban on headscarves for city council workers and in all institutions and clubs which get local authority money will be the most important point in the PVV´s negotiations to join governing coalitions in Almere and the Hague, says party leader Geert Wilders.

Speaking to RTL news, Wilders said the ban would be central to talks to form new local authority executives in the only two cities where the party is contesting the March 3 local elections.

The ban will apply to 'all council offices and all other institutions and clubs which get even one cent of council money,' he said.

The PVV is tipped to emerge as the biggest party in Almere and second biggest in the Hague.

Wilders brought up the ban again in a speech to supporters in Almere, where he entered the room to the Rocky theme tune Eye of the Tiger.

The ban will not apply to other religious items such as Christian crosses and Jewish skull caps because these are symbols of our own Dutch culture, Wilders said in his speech, receiving a standing ovation from the crowd.

The speech began with a 'lengthy tirade' against the 'arrogant Labour party', according to the Volkskrant report of the meeting. 'If you translate the PvdA's Arabic language election brochures they say 'bring your family here. You get benefits, we pay for everything', the Volkskrant quoted the PVV leader as saying.

'Almere must become the safest city in the Netherlands,' he said. 'There will be an end to subsidies for Turkish macramé and Arabic finger painting. Not just the Netherlands but all of Europe will look to Almere.'

Wilders is currently facing charges of discrimination and inciting hatred against non western immigrants and Muslims. He always maintains he is opposed to Islam, not Muslims themselves.

Earlier this week, Wilders told the Telegraaf the PVV´s commitment to maintaining the current retirement age of 65 would be crucial in negotiations to form a new national government, following the collapse of the CDA, Labour and ChristenUnie alliance last weekend.

Most parties have already ruled out forming a coalition with Wilders. Only the Christian Democrats and right wing Liberals VVD have not done so.

Opinion polls make it likely that four parties will be needed to form a new government after the June 9 vote.

Mr Wilders has previously demanded in parliament that women who wear hijab should be subject to a 'head rag tax'.