Muslim women reject cleric's advice to stay away from politics 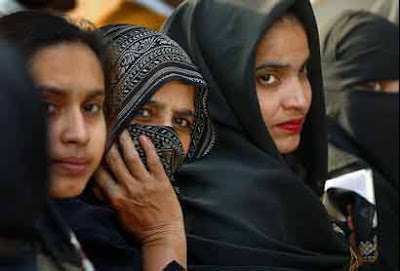 Muslim women have reacted angrily to a leading Muslim cleric's advice to keep away from politics and concentrate on home and family, saying this could be his personal view and there is no such stipulation in Islam.

Even as the debate over the women's reservation bill continues, Shia cleric Maulana Syed Kalbe Jawwad had said Saturday that women should have no role in politics and stay at home.

'They should become mothers of good leaders rather than try to be leaders themselves,' he reportedly said. Also, the Lucknow-based Nadwatul Ulema had also issued a 'fatwa' (edict) against Muslim women's participation in politics, in line with the 2005 fatwa of the influential Darul Uloom Deoband, which contends that Muslim women cannot remain in purdah when in politics.

However, the advice has not been taken well by Muslim women here who not only described them as 'personal views' and also disagreed that it could be a fatwa as Islam does not prohibit women from being leaders and a fatwa can only be issued in reply to religious queries.

'Who is he to advise us on what to do and what not to do? It is a conspiracy of vested interests to keep women within the four walls of a house under the garb of Islam's strictures despite our religion giving equal status to men and women,' social activist Shahala Masood told IANS.

Her views were supported by 'Shahar Qazi' (city religious judge) Abdul Lateef Qasmi. 'Islam does not prohibit women from being leaders but if some one has issued any fatwa, it needs to be checked under what circumstances it was delivered,' he said.

'The views expressed by ulema could be their personal thoughts as no one had sought their opinion. I am of the view that more and more women from the community should come forward and contest elections as Islam does not put any bar on it,' Samajwadi Party member Nazma Parveen told IANS.

'Everyone has the liberty to express views, and the statement of the Maulana could be his personal view, because as far as my knowledge is concerned, Islam does not prohibit women from entering politics,' Congress state unit women cell general secretary Noori Khan said.

Madhya Pradesh Urdu Academy secretary Nusrat Mehndi contended women should prepare themselves for a double responsibility 'looking after domestic activities and performing well in professional life as well, be it politics or job,' she said.