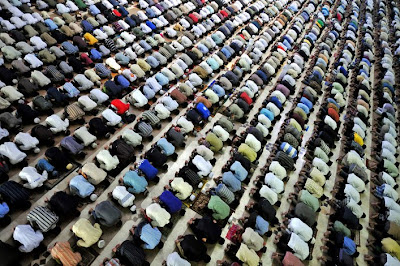 Back in his boyhood home of Indonesia, Obama will find a conservative state that has fought off radical Islam

When Barack Obama arrives in Indonesia this month he will find a country far different from the one he lived in. When he moved there at the age of 6, in 1967, the country's economy was verging toward bankruptcy; strongman Suharto had just started his 32-year-long, iron-fisted reign; and millions of people embraced a type of Islam tinted with animism and a belief that the volcanoes that dot the land housed powerful spirits. Today Indonesia is a thriving democracy, an emerging economic powerhouse, and far more rigorously Muslim in character. More than 40 percent of the books published annually are now dedicated to Islamic teachings or Muslim pop culture, and in the past 10 years, sales of Muslim books have surpassed those of schoolbooks. A 2007 poll showed that Indonesians were more likely to consider religion the most important factor in defining their identity than nationality or ethnicity.

After Suharto's fall, in 1998, new ideas burst forth. Dozens of Muslim-based political parties began competing, and in the mayhem created by the fall of the dictatorship, combined with the Asian economic crisis of the late '90s, many predicted a turn toward fundamentalist Islam. Even secular politicians started to jump on the religion bandwagon. In the 2000s, about 50 of the 450 districts and municipalities in Indonesia passed a string of Sharia-inspired regulations. New Islamic movements prospered, including the Party for Justice and Prosperity, or PKS, a party rooted in the Muslim Brotherhood, an organization that now rejects violence but whose political wing is banned in its birthplace, Egypt, for its advocacy of Sharia. In last year's Indonesian parliamentary elections, the PKS won 7.8 percent of the vote and became the fourth-largest group in Parliament, with four ministers in government. So sensitive is religion that authorities never officially banned the homegrown terrorist group Jemaah Islamiah. In fact, it was not before militants attacked a peaceful demonstration in Jakarta in June 2008 that President Susilo Bambang Yudhoyono's government pushed back against the Islamic Defender Front, an organization that had led violent actions to uphold its agenda, such as attacking bars open during Ramadan.

Indeed, the president's conciliatory style is often blamed for a long tolerance of intolerance. Yet the most virulent Islamists never managed to get a real foothold in politics. Indonesia is among the most observant of Muslim countries. A 2008 Pew poll showed that 80 percent of Indonesian Muslims say they pray five times a day, compared with 59 percent in Egypt, 46 percent in Pakistan, and 34 percent in Turkey. But most of them belong to one of two moderate organizations: Nahdlatul Ulama and Muhammadiyah, which focus on social work and preach an inclusive view of Islam. Overall, Islamist parties have experienced drops in support at the ballot box, from 24 percent in 2004 to 16 percent last year. At the local level, most of the leaders who adopted Sharia-based laws have not been reelected. PKS has held on only by deemphasizing religion in favor of clean governance. And the consolidation of democracy in Indonesia has resulted in a growing feeling that terrorists are enemies of the nation. When the terrorists responsible for the 2002 Bali attacks were executed in 2008, hundreds of radicals gathered in the terrorists' home villages to give them martyrs' burials. But after the terror attacks that shook Jakarta last July, villagers refused to bury the suicide bombers who died in the attacks.

Old-line Muslim groups still worry that they are losing control of many of the nation's thousands of mosques and schools to a more radical Islam. They fear that militant groups may seem more inviting to the young, and that the tradition of dialogue favored by moderates does not work well in a chaotic young democracy, where those who shout the loudest get the most attention. But moderates are starting to fight back and, for now, winning the battle, helping to maintain a different kind of Muslim country: one that bridges Western-inspired ideals with an increasingly conservative population.