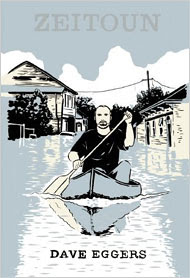 Sometime back I blogged about Abdalrahman Zeitoun.

Dave Eggers has accomplished a rare feat this week: He simultaneously made the L.A. Times nonfiction and fiction bestseller lists.

His nonfiction book "Zeitoun" is the story of a family in New Orleans before and after Hurricane Katrina. When he began his book tour in August, he packed Skylight Books in Los Feliz to overflowing. People stood outside on the sidewalk, as if there were speakers out there to enable them to listen (there weren't). "Zeitoun" is currently at No. 7 on our nonfiction bestsellers list, where it's been for seven weeks.

A film version of a book about a man’s true-life experiences in post-Katrina New Orleans would seem sufficiently pregnant with artistic possibility. Still, Jonathan Demme plans to take his adaption of “Zeitoun,” the best-selling Dave Eggers work, one step further by making it as an animated feature.

On Wednesday, Mr. Demme (whose films include “The Silence of the Lambs” and “Rachel Getting Married”) said that he had acquired the film rights to “Zeitoun,” whose cover illustration by Rachell Sumpter had inspired him to make it into a cartoon.

“I was staring at the book,” Mr. Demme said in a telephone interview, “and there’s this wonderful line drawing on the cover, the character of Zeitoun in his canoe, paddling through a submerged neighborhood. And I suddenly imagined, What if we could do an animated film and visualize the experiences of the Zeitoun family and all of New Orleans?”

The book by Mr. Eggers (a co-author of the screenplay for “Where the Wild Things Are”) tells the story of Abdulrahman Zeitoun, a Syrian-American man who remained in New Orleans after Hurricane Katrina to protect his home and business, and paddled its flooded streets in a canoe, offering his help to other flood victims.

Mr. Demme said he read the book soon after its publication in July, having been previously introduced by his son, Brooklyn, to Mr. Eggers’s reported novel “What Is the What,” about a young refugee from the Sudanese civil war. “He said, ‘Dad, you’ve got to read this book, it changed my life,’” Mr. Demme recalled. “And I read it, and it changed my life, too.”

Mr. Demme already had firsthand knowledge of the reconstruction efforts in New Orleans, having spent several months filming there for a series of documentaries called “Right to Return: New Home Movies from the Lower 9th Ward.” Through mutual friends, Mr. Demme sent Mr. Eggers a note to say he had enjoyed “Zeitoun,” and optioned the movie rights soon after.

The film does not yet have a release date or a distributor, but Mr. Demme said it would be produced by his frequent producing partners Ilona Herzberg, Ed Saxon, and Mark Platt, and that Daniel Pyne, who wrote the screenplay for Mr. Demme’s remake of “The Manchurian Candidate,” would write its script.

The director said he was presently “deep, deep, deep into researching” how he would produce the animation for his film, but that he favored a hand-drawn style. He also said that the film’s score would be created by the New Orleans jazz performer Donald Harrison Jr. and the Palestinian musician Zafer Tawil, who both contributed to the score of “Rachel Getting Married.”

Mr. Demme emphasized that the story of his “Zeitoun” film would stick closely to the facts of Mr. Eggers’s book. “While honoring the absolute truth of the Zeitouns’ experience and the truth of what happened in New Orleans,” he said, “we all feel like we have a chance to do right.”

In an email message, a representative for Mr. Eggers said that the option money for “Zeitoun” was was paid to the Zeitoun Foundation, a nonprofit grant group that distributes money to other New Orleans nonprofits and organizations that promote the understanding of Islam.