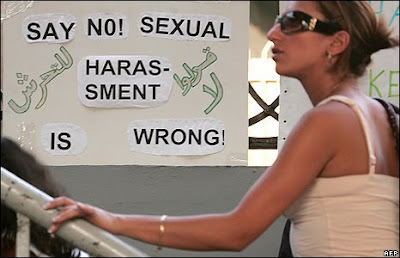 It is well known that sexual harassment is a pervasive problem in Egypt, from touching to lewd and abusive cat calls.

But it seems there is another phenomenon that goes largely unreported, phone stalking. With the advance of modern technology a large number of women complain they receive the unwelcome and relentless attention of men they have never met.

One of our colleagues in the BBC office has had a number of phone stalkers, who call repeatedly through the day and sometimes in the middle of the night. She has given them no encouragement - but rarely do they need it.

"What's your name?" enquired one whose mobile number has become depressingly recognisable.

He knows who he is talking to, because some weeks ago our colleague had engaged him in conversation, a decision she soon regretted. It was the only encouragement he needed to start pestering her with calls.

Most of the harassment - calls and texts - are from young men who ring numbers at random, and often the conversations are fairly commonplace. But occasionally they can lead to something more sinister.

"We know of some cases where it has turned nasty," said Nihad Qomsan, from the Egyptian Centre for Women's Rights.

"We have had cases where the caller tells her, 'I know you, I know your address' or 'I know where you work or where you study'. And he keeps calling - then the language becomes more threatening or insulting. By then it is too late."

At the youth magazine Teenstuff, the girls we interviewed said they'd all experienced some form of phone stalking.

"I was once stalked by someone I know," said 16-year-old Safeya Zeitoun. "He would call every hour."

"I give the phone to my brother and he shouts at them," said another 16-year-old, Marwa Makhlouf .

"They think it is funny but it's so frustrating and sometimes it causes real problems for the girl.

"Sometimes she has to tell her friends and only when they each share their stories do they realise they all have the same problem."

In fact in a survey last year of 2,000 women by the Egyptian Centre for Women's Rights, 83% said they had encountered some form of sexual harassment - 23% said they were receiving obscene phone calls. But even so, statistics on how widespread this is are hard to come by.

Nonetheless there are those who believe phone stalking is symptomatic of a bigger issue.

"The only outlet for legitimate sex in Arab society is marriage, which is very difficult to afford these days," said Said Sadek, sociologist from the American University of Cairo.

"They call any number until a woman answers in a soft way, in a way they might find a bit encouraging and they pursue her. But if women filed a complaint about this kind of thing - the caller can be found, no problem."

It should be easy to stamp out. About two years ago, following a number of angry protests and strikes organised by mobile phone users, the government moved swiftly to introduce legislation that required anyone buying a Sim card for a mobile phone to supply a name and address.

And yet all too often the harassment goes unreported. Either women don't believe it will be taken seriously or they don't want the added frustration of the red tape.

"Historically there have been lots of barriers between women and the police," said Nihad Qomsan.

"In the past the police station has often been a source of more problems.

"But increasingly they are taking these cases of sexual harassment more seriously, which is positive."

In February this year, parliament introduced a bill seeking the introduction of stronger penalties for sexual harassment.

It will compel police to investigate all allegations of sexual harassment and those guilty of phone stalking could receive heavy fines.

But the evidence suggests there is still a way to go in changing the attitude of both men and women so that society understands that sexual harassment includes all forms of physical and verbal abuse.

Empowering women in the Middle East is a much-discussed idea but it has run into a number of obstacles – mainly Islamic conservatism, which sees the woman's place in society as a wife, daughter and provider to her male counterparts. There are plenty of progressive views around, but in reality life is difficult for liberal-minded women in Egypt.

Taking Tunisia's lead, Egypt's parliament earlier this year approved a quota system for women that aims to increase female representation. In Tunisia, the quota system has been quite successful. In 2004, women won 22.8% of parliamentary seats – which in the view of many women shows the idea is working, much as America's affirmative action policy worked to put African-Americans on a more equal footing. In that respect Tunisia has, despite its obvious political failings as an undemocratic state, set an example for the rest of the region to follow.

"Tunisia wishes to actively take part in empowering women in Arab societies," Tunisia's first lady, Leila Ben Ali, said when discussing women's issues in Tunisia and the region. She added that positive discrimination for women through the quota system "is but a factor and not the sole one" for the empowerment of Arab women. "In the near future, when Tunisian women will have proven their competence, Tunisia will no longer need the quota system," she added.

But Tunisia, which sees itself as a gateway between Europe and Africa, has a longer history of buttressing women's rights and has also curtailed Islamic opposition for decades. In 1990, women held 3.4% of parliamentary seats, nearly twice as many as in the current Egyptian parliament. This number doubled by 2004, when the quota was introduced.

According to women's groups in Egypt, after the 2005 elections, only eight women were in parliament, and four of those were appointed by presidential decree. Change was definitely needed. The new quota approved this summer will increase the number of parliamentary seats from 454 to 518 by adding 64 seats set aside for female politicians.

The major problem with this is that the quota system is a partisan endeavour. The ruling National Democratic Party (NDP) understands this well. The NDP is the only party capable of fielding enough women candidates and will therefore come out on top, further reducing the influence of an already stifled opposition.

The new quota comes into effect for next year's parliamentary elections, and opposition groups are crying foul. "The NDP hopes to monopolise these additional seats in order to shore up its parliamentary majority," said Muslim Brotherhood MP Hamdy Hassan. "By having to run in vast electoral districts, such as Cairo or Alexandria, female candidates will not have a chance of winning unless the contest is rigged in their favour."

The extra 64 seats give women a minimum of 12% representation in parliament – half that in Tunisia. But at least it is something.

And where are the female opposition leaders? On 14 October, Egyptian opposition leaders and parties came together to announce an anti-succession campaign against Gamal Mubarak's possible ascension to power but only one female leader, Kefaya's Karima el-Hefnawy, was present out of some 50 leading opposition candidates. Not a promising percentage.

Unlike Tunisia, where women have been making an impact in all segments of society, Egypt remains a good-old-boys country, where to be a woman means to suffer the ills of society, without a voice in power to provide support.

If the Egyptian opposition doesn't like the new quota, maybe it should start to grow up and realise that this will enable and empower women. If the NDP is the only party with enough members to put forward on the ballot, then it is time to rethink who is among the opposition.

Hala Mustapha, a leading NDP woman, told me in an interview two years ago that the ruling party is the only one with women as key figures "because the opposition continues to struggle and they still see politics as a man's world". She continued: "The NDP has at least given us a chance and we are working on a number of issues to help empower women. A long way to go still, but we are here and that is a good start."

It is easy to argue that the NDP uses women as a way of telling the west: "Hey, look at us, we have women in government." Even so, at least they have women prepared and ready.

The opposition doesn't seem to understand the need for women leaders and if it doesn't do something about that soon, Gamal will be president and the NDP will have 64 more seats in parliament.