Both Thanksgiving and Eid al-Adha Focus on Family, Sharing 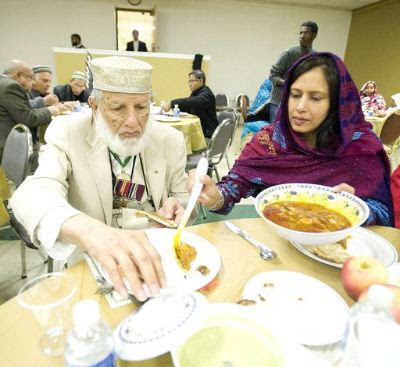 Both Thanksgiving and Eid al-Adha Focus on Family, Sharing
By Nihad Awad

Many American Muslims will eat their turkey a bit late in the day this year because Thanksgiving falls on the same day some Muslims fast until sunset in observance of the Day of Arafah, the spiritual peak of the annual pilgrimage (Hajj) to Mecca.

Arafah is a hill called "Mount of Mercy" and its surrounding empty plain near Mecca. On this climax of the Hajj season millions of pilgrims of all races and backgrounds, including thousands of Americans, will assemble for supplication to God. This is a physical representation of universal equality and the unity of humankind.

American Muslims have a double blessing this year. They are marking both events, Thanksgiving and the end of Hajj, with activities that stress sharing with others and the importance of family to people of all faiths.

The New Jersey chapter of the Council on American-Islamic Relations (CAIR) called on Muslims in that state to volunteer at a soup kitchen as a way to celebrate Thanksgiving and the end of the Hajj. CAIR’s Cincinnati chapter is giving food packages, including turkeys, to needy families.

Thanksgiving week, the Muslims Against Hunger Project is organizing special "Muslims Serve" days to recall the ultimate sacrifice the Prophet Abraham was prepared to make and to offer thanks for God's many blessings.

Hajj and Thanksgiving were also combined in a New Jersey food giveaway for the needy on Sunday in Plainfield, N.J., at the Center of Islamic Enlightenment.

In Mississippi, scores of Muslim volunteers gave up their free time to feed the hungry and homeless in areas particularly hard hit by the national recession.

Muslim university students in North Carolina this year donated food to groups that feed the hungry. While in California, Muslims joined Jews, Buddhists, Baha'is, and Catholics at an interfaith Thanksgiving celebration in a synagogue.Muslims in Iowa, along with representatives of nine other faith traditions, attended the annual Inter-Religious Council Thanksgiving Prayer Service in Cedar Rapids.

In Georgia, Christians, Muslims and Jews came together to share a pre-Thanksgiving dinner. Proceeds from the dinner went to a local food bank.

On Friday, Muslims in America and worldwide will celebrate the holiday of Eid al-Adha, or "festival of the sacrifice." "Eid" also commemorates the Prophet Abraham's willingness to sacrifice his son Ishmael at God's command. The holiday is celebrated with prayers, gifts for children, distribution of meat to the needy, and social gatherings.You may hear the greeting “Eid Mubarak,” or “have a blessed holiday.”

And you know Thanksgiving and Eid al-Adha are now sharing the same spiritual and social space when Best Buy, for the first time, puts a "Happy Eid Al-Adha" in its "Black Friday" newspaper insert.

As with Thanksgiving, Eid al-Adha is a time when everyone counts their blessings and offers thanks for friends and family, even if circumstances may not be the best in any particular year.

"The first to be summoned to paradise on the Day of Resurrection will be those who praise God in prosperity and adversity," said the Prophet Muhammad.

Just as Thanksgiving is a time of family and friends, so too is Eid al-Adha. The Prophet Muhammad told the early Muslims, "[T]hey are days of [eating] and rejoicing with one's family."

The Quran, Islam's revealed text, urges those who reach physical and spiritual maturity to pray: "My Lord! Grant me the grace that I may thank you for the favors that You have bestowed on me and on my parents, and that I may do good deeds that will please You."

So this year, despite a weak but recovering economy and other domestic and international troubles, let us all count our blessings and demonstrate true thankfulness by sharing whatever we have with those in need.

(Nihad Awad is national executive director of the Council on American-Islamic Relations (CAIR), America's largest Muslim civil rights organization. He may be contacted at: nawad@cair.com.)