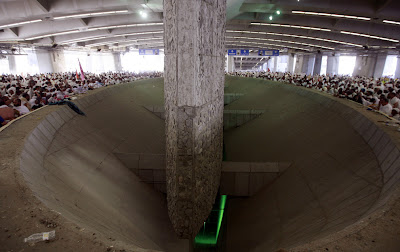 Thousands of Muslim pilgrims cast stones at a pillar, symbolising stoning Satan, in a ritual called "Jamarat," the last and most dangerous rite of the annual hajj, near the Saudi holy city of Mina on December 8, 2008. To complete the ritual, a pilgrim must throw 21 pebbles at each of three 25-meter (82-foot) pillars and this year the faithful are being given pebbles in pre-packed bags to spare them the effort of searching for the stones. 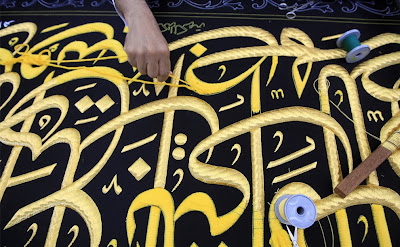 A Saudi worker sews Islamic calligraphy in gold thread on a drape to cover the Kaaba at the Kiswa factory in the holy city of Mecca on November 29, 2008. The Kaaba cover is called Kiswa and is changed every year at the culmination of the annual Hajj or pilgrimage. The Kaaba, Islam's holiest site which stands in the centre of Mecca's Grand Mosque, contains the holy Black Stone which is believed to be the only piece remaining from an altar built by Abraham. 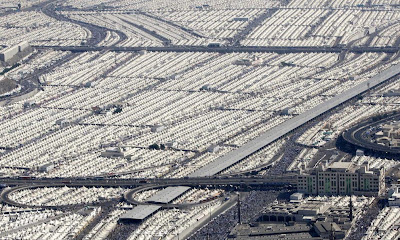 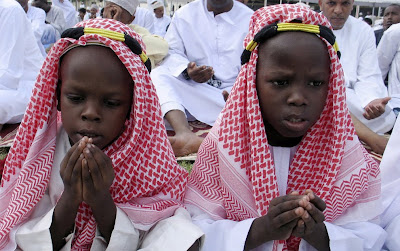 Faithful pray on the first day of the Muslim religious festival of Eid al-Adha in Kenya's coastal town of Mombasa, Kenya on December 8, 2008. 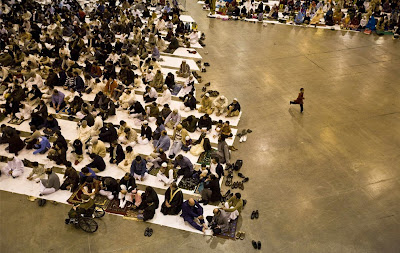 Some of the approximately 12,000-13,000 members from 19 mosques in the Islamic Society of Greater Houston gather on Moday, Dec. 8, 2008 to celebrate Eid-al Adha at the Reliant Center Hall in Houston, Texas.
Posted by Zafar Khan at 08:42