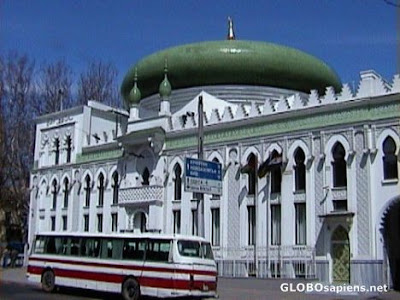 Forty-five weekly schools that teach the Arabic language are gaining popularity among Ukrainian intellectuals and are helping introducing them to Islam and its civilization.

“Arabic, the language of the Qur’an, has become a window for many Ukrainians to know Islam,” Dr. Shadi Shawer, the head of Human Development Department at the Federation of Social Organizations in Ukraine (Arraid) and the schools supervisor, told IslamOnline.net.

He said the weekly schools help many Ukrainians to better understand the Muslim faith.

“The schools have become one of our tools to promote Islam and show its true image.”

Shawer said there are 45 weekly schools across the country that teach Arabic language, eastern culture and Islamic sciences over a period of three years.

Most of the students enrolled at the charges-free schools are university students and professors who attend classes once a week.

“Many enroll to know the Arabic culture to better communicate with Arab students at Ukrainian universities,” he said.

The Muslim leader notes that some students end up embracing Islam during or after the course.

Ukraine is home to some two million Muslims making up 4 percent of the estimated 48-million population.

There are up to 200 mosques and 20 Islamic centers in the country.

Many Ukrainians credit the Arabic schools for changing their misconceptions about Islam.

“I used to have a negative view about Islam from the local and international media,” Irina Sladkikh, a university students’ affairs secretary, told IOL.

“But this has changed after attending the school,” added Sladkikh, who is set to graduate from the Arabic school this year.

“The school has brought me closer to the Arab world,” he said.

“I feel that I know much about Islam and the Muslim community.”

Thanks to the schools, many Ukrainians now have better understanding of the Muslim faith.

“I was surprised to know the true image of Islam after joining the school,” says Julia Bondinia, a university teacher.

“This has motivated me to invite two colleagues to enroll.”

Vikyoria, a third-grade student at the Faculty of Medicine, joined the school to better know the Arabic culture.

“Now I feel the school has become inseparable part of my life.”