For Iraqi Widows, marriage is the only option 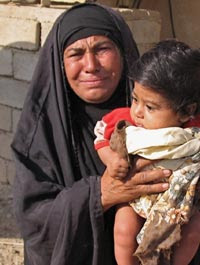 Haifa Ahmed Mua’alim, 32, is going to tie the knot in a couple of weeks.

She is marrying a man recommended by her sister-in-law to help feed her two orphan children of a previous marriage.

The young woman lost her husband, the love of her life, two years ago to the violence that has been plaguing her country since the 2003 US invasion.

"When he died I decided never to marry again. We had a stable and lovely relation," she recalled tearfully.

For the past two years Haifa has been struggling to feed her kids, spending every penny they once had.

But without work or help from any one, she is accepting to remarry at the advice of her deceased husband's sister.

"I’m being forced to change my mind in exchange for a better life for my sons."

Haifa only saw the future husband once and never spoke with him, insisting it's a marriage of convenience for both of them.

"My sister-in-law told me that he also lost his wife and he is a good man who carries four children in his baggage," she said.

"Maybe it is too precipitated and latter on, I might regret, however, it is better to take care of six children than see your two sons hungry and unable to go to school," Haifa reasoned.

"I’m glad to find someone willing to take care of them but being happy is another issue that I prefer to keep for my own."

The Ministry of Labour and Social Affairs estimates there are nearly two million widows and five times kids living without fathers in the country.

"Widows are a serious case in Iraq. Our ministry is trying to help but the lack of proper budget is seriously affecting our work," said a senior officer, requesting anonymity for not being allowed to speak to the press.

"More widows will be added to this group and to help them the parliament should focus on their problem, create enough conditions for them to work and feed their children."

Haifa represents a new trend in Iraq which is encouraged by religious leaders who have been advising single and widower men to marry widows as a way to help them.

"Those women are victims of the violence in our country," Sheikh Abdul-Kareem Rafel, a religious leader at Sadr City, told IOL.

"The government isn’t offering them enough help to raise their kids alone and advising Iraqis to marry them is a nice way to prevent millions of kids from being raised without a father and prevent women from becoming prostitutes to support them."

"Instead of encouraging women to remarry, we have to force the government to help them, offer stable living conditions and open job places as the majority became widows because of the unfair war in the country," she told IOL.

"Of course there are women who prefer to be in such unacceptable situation but they are few and the majority is marrying again because it was the only choice found," she contends.

"If the government takes responsibility towards them, I’m sure this number would decrease impressively."

Sara al-Azza, a member of a charity that has nearly 1,200 widows registered with more than half willing to remarry, disagrees.

"We cannot keep waiting for the government to take an action," she told IOL.

"The women come to us after deciding to remarry and what we do is just look for men who have a good background, true good intentions and are able to support her family," she explains.

"No one is forced to marry but we have made many arrangements with the both sides happy to start a new life together.

"Since we started working on this issue, we never had a complaint from any of the parties. It is a serious matter and we are happy to help."

Rhim Abdel-Rassoul Rabia’a, a 41-yrea-old mother of three who lost her husband three years in a Baghdad bomb attack, is waiting for a second husband.

"After years of looking for a job, I got desperate and that’s why I started looking for a second marriage even though that was the last thing I would like to do," she told IOL.

"I was told that women over 40 take more time to find a husband but this is my only hope. I just want a man to look after me and my kids, even if I marry without love."

Rhim says when she was a young girl she dreamed of a life of happiness, studying and working to become someone important in life.

"I know that none of my dreams can come true but at least I can help my kids become able to support themselves without the need to remarry for that."