Israeli Settler has God Given Rights to kill Palestinians 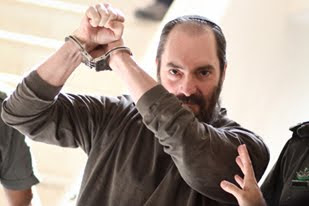 A Jewish-American, who settled in the occupied West Bank, has been charged with killing two Palestinians and attempting to murder more people.

Jack Teitel told reporters at a Jerusalem court on Thursday that he had no regrets for shooting the pair and trying to kill the others with explosives and poison, and that God would approve of his actions.

"It has been a pleasure and an honor to have served my God," Teitel, an ultra-Orthodox Jew originally from Florida in the US, said.

Teitel has a total of 14 charges against him including two for murder and three for attempted murder.

He has also been charged with illegal possession of explosives and weapons and incitement to racism.

The indictment said that Teitel, 37, was trying to avenge the deaths of Israelis killed by Palestinian fighters.

It added that he began his assault by killing a Palestinian taxi driver in 1997. He also attacked a dovish Israeli professor and messianic Jews who venerate Jesus.

No date has yet been set for the beginning of the trial.

Teitel faces up to life in prison if convicted.