Paedophile rapist to be beheaded - Will anyone complain 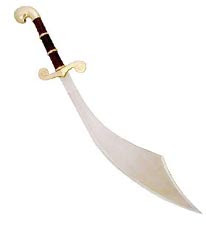 A man who kidnapped and raped five children, one of whom was left in the desert to die, has been sentenced to be beheaded and his body publicly crucified.

Muhammed Basheer al-Ramaly, 22, from the northern city of Hail, in Saudi Arabia, will be executed at noon today.

He will be beheaded by sword then his body tied to a wooden cross and his head stuck on a pole as a deterrent.

Al-Ramaly was found guilty in February of abducting and raping five boys, the eldest of whom was 7 and the youngest just 3, who he left out in the desert to die.

His modus operandi was to pick up the boys in his car and take them off to a secret location and rape them. Most of them were found a day or two after they were abducted, and told police that they had been abused.

Saudi reports said that police used one of the survivors, a seven-year-old boy, to scour the area where he was molested, looking for the suspect's vehicle.

Al-Ramaly allegedly confessed to the crime and was sentenced to death by a court in Hail, but appealed to a higher court in the Saudi capital, Riyadh.

That court yesterday upheld the sentence and ordered his immediate execution. While Saudi Arabia carries out numerous beheadings -- 102 last year, according to Amnesty International - crucifixions are relatively rare. The last one appears to have been in May, when the headless body of a sex murderer was displayed in the capital.

Amnesty said there were reports that al-Ramaly may have been suffering from a psychological disorder.

One Saudi web forum claimed that police had been surprised when he laughed as he confessed to the rapes and murder.

Saudi Arabia has come under fire from human rights groups in the past for its high number of executions.

About half of the 1,695 executed between 1985 and 2008 were foreign workers unable to pay the blood money that relatives of murder victims can demand in lieu of the death penalty, according to Amnesty.