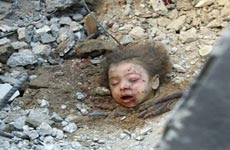 A Jewish rabbi has issued a book giving Jews permission to murder non-Jews, including babies and children, who may pose an actual or potential threat to Jews or Israel.

"It is permissible to kill the Righteous among non-Jews even if they are not responsible for the threatening situation," Rabbi Yitzhak Shapiro, who heads the Od Yosef Chai Yeshiva in the Yitzhar settlement in the occupied West Bank, wrote in his book "The King's Torah."

He argues that goyem (a derogatory epithet for non-Jews) may be killed if they threaten Israel.

"If we kill a Gentile who has sinned or has violated one of the seven commandments - because we care about the commandments - there is nothing wrong with the murder."

Shapiro, who heads a small Talmudic school at the settlement of Yitzhar near Nablus, claims his edict "is fully justified by the Torah and the Talmud."

The anti-goyem edict seems to come in response to the arrest by Israeli police of a Jewish terrorist who has confessed to having murdered two Palestinian shepherds in the West Bank.

Police considered the arrest an important achievement in combating Jewish terrorism, which experts contend thrives on religious edicts issued by rabbis affiliated with the religious-Zionist camp.

In 1994, Baruch Goldstein, a notorious Jewish terrorist, murdered 29 Muslim worshipers inside Al-Ibrahimi Mosque in the West Bank town of al-Khalil.

The controversial edict is backed by numerous rabbis affiliated with the so-called national-religious camp as well as the Talmudic seminary in West Jerusalem, known as Merkaz Ha’rav.

Among the rabbis who have publicly supported the edict are Yitzhak Ginsburg and Ya’akov Yosef.

Ginsburg had written a leaflet glorifying murderer Goldstein and called him a "saintly figure."

Shapiro’s views on how Palestinians and non-Jews in general ought to be treated according to Jewish religious law (halacha) are widely looked at as representing the mainstream not the exception in Israel.

During the Israeli onslaught against Gaza earlier this year, Mordecahi Elyahu, one of the leading rabbinic figures in Israel, urged the army not to refrain from killing enemy children in order to save the lives of Israeli soldiers.

He had even petitioned the Israeli government to carry out a series of carpet bombing of Palestinian population centers in Gaza.

Many Jewish orthodox rabbis, especially within the national-religious sector, view international conventions incriminating the deliberate killing of civilians and destruction of civilian homes and property as representing "Christian morals" not binding on Jews.

In 2006, the Rabbinic Council of Jewish Settlements in the West Bank urged the army "to ignore Christian morals and exterminate the enemy in the north (Lebanon) and the south (Gaza Strip).

Such manifestly racist and hateful edicts don’t raise many eyebrows in Israel, neither among the intelligentsia nor in the society at large.