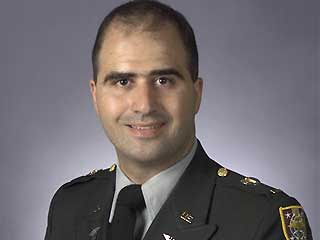 Last week, we heard of Major Nidal who went on a meaningless rampage and killed some 13 American soldiers.

He was not a soldier returning from deployment in either Iraq or Afghanistan, suffering from stress or combat fatigue. Hasan, although 39 years old, has never served in a war zone. Instead, his horror of war came secondhand. He was a psychiatrist who listened to the harrowing stories of his comrades at the Walter Reed Hospital in Washington DC, and latterly at Fort Hood, Texas.

Unusually for a soldier, Hasan appeared to have little taste for violence, at least up until yesterday. His cousin, Nader Hasan, said: "He was someone who did not enjoy going to the firing range." That may have been a consequence of the stories he had heard in the hospital wards from the returning soldiers.

Hasan became an unhappy soldier as his career progressed, according to his family and colleagues.

Nader said his cousin, though born in America, had suffered harassment from fellow soldiers who questioned his loyalty to the US and commented on his Middle East ethnicity. As a Muslim, he was upset at the killing of Muslims in Iraq and Afghanistan, and Nader confirmed that he had been resisting deployment in either war zone.

Other Muslims serving in the military immediately spoke out against it. If a non-Muslims does something then generally its ok but if a Muslim does something, all Muslims have to come out and condemn it. This is the unfortunate written rule of the west. CAIR was one of the first organisations to condemn the killing and and they have recently re-iterated their comment.

At least 3,500 Muslims are known to be across the military. An additional 283,000 service members have not identified themselves with any religious preference, meaning there could be more Muslims who do not describe themselves that way for military records. Hasan's personnel files did not identify him as Muslim, for example.

In the years since 9/11, the military has made extraordinary efforts to encourage Muslims to join its ranks. Last year, the Army announced a program to pay $150,000 as a signing bonus to Arabic speakers, for instance.

While racism and religious intolerance exist in American society and the military reflects that, it's unlikely that in today's modern military, a Muslim officer would be overtly harassed: It would be a violation of rank and authority, says one Muslim officer, who says such charges don't ring true for her.

Maj. Aisha Bakkar says that her fellow Marine officers and enlisted Marines have never had a problem with her religious background. On the contrary, she believes that people are receptive to her faith and that the events of 9/11 actually have enlightened a lot of people about Islam.

She says she makes no secret about her faith, and she is proud of her heritage. Her father, from Syria, joined the Marine Corps and flew helicopters.

During her own career, she says, she has sometimes had to step in to correct misconceptions about Islam and Islamic extremism.

"I listen to them and then ask, 'What Koran are you reading?,' because it's clearly not the same one,' " she says. "It's just unfortunate that the religion is being bastardized by some fundamentalists." Bakkar will be promoted within the next year and is a public-affairs officer at Marine Corps Air Station Cherry Point, N.C.

Past incidents have raised questions about Muslims in the military, including in 2003 when a US Army sergeant and a convert to Islam rolled a grenade in a tent that killed two officers and injured more than a dozen others. During his trial, it came out that Sgt. Hasan Akbar feared that Americans would kill Muslims.

To Bakkar, such incidents can "put another black eye on the whole Muslim religion," she says. She feels as if the community takes one step forward, only to take two steps back.

Recently it has come to light that the Army psychiatrist authorities say killed 13 people and wounded 29 others at the Fort Hood Army Base Thursday was a recent and frequent customer at a local strip club, employees of the club told FoxNews.com exclusively.

Maj. Nidal Malik Hasan came into the Starz strip club not far from the base at least three times in the past month, the club's general manager, Matthew Jones, told FoxNews.com. Army investigators building their case against Hasan plan to interview Jones soon.

"The last time he was here, I remember checking his military ID at the door, and he paid his $15 cover and stayed for six or seven hours," Jones, 37, said.

Hasan's presence at the club paints a starkly different portrait of the alleged killer from that offered by his imam and family members, who have described him as a devout Muslim, and one who had difficulty finding a wife who would wear a head scarf and would pray five times a day.

Starz is a strip club located just down the road from the main gate entrance to the Fort Hood Base. It does not serve alcohol, but customers bring their own beer and liquor and buy ice buckets and mixers at the club.

Hasan sat at a table in the back corner of the club, to the left of the stage on which strippers dance around a pole, employees said.

Jennifer Jenner, who works at Starz using the stage name Paige, said Hasan bought a lap dance from her two nights in a row. She said he paid $50 for a dance lasting three songs in one of the club's private rooms on Oct. 29 and Oct. 30.

Investigators have so far failed to uncover the motives behind the shooting as some reports suggested a link between Hasan and Anwar Al-Awlaki, an American-born imam of Yemeni background said to have radical views.

Al-Awlaki preached in 2001 at the Dar al Hijrah Islamic Center in Falls Church, Va., where Hasan used to pray. Two of the 9/11 attackers reportedly prayed at the same mosque.

Some reports suggested that the imam, who now lives in Yemen, praised what Hasan did and described him as a "hero."

But prominent scholars insist the killing spree is unjustified under Islam.

"We must remember that [Fort Hood] is a camp--this is not war. This is not an act in the middle of a war," explains Akbar Ahmed, a noted Islam scholar.

For Imam Zaid Shakir, a prominent imam at the Zaytuna Institute in California, the issue is crystal-clear in the Qur’an.

"Killing innocent humans, the essence of terrorism, is equated with murdering all of humanity," he told IOL.

The Council on American-Islamic Relations (CAIR) repudiated any praise for the Fort Hood tragedy.

"To call the alleged killer a 'hero' makes a mockery of every Islamic principle of justice," CAIR National Executive Director Nihad Awad said in a statement.

"The twisted and misguided views in al-Awlaki's posting are not those of American Muslims and do not reflect mainstream Islamic beliefs or sentiments."

Ahmed, also the Ibn Khaldun Chair of Islamic Studies at American University, said the tragedy had to be seen as a human tragedy, something horrible an individual did because of immense pressure being placed on soldiers involved in a long, drawn-out conflict, and in the context of a suspicious, post 9/11 America.

"Everything these days is seen in terms of terrorism and plots and conspiracy," he told IOL.

"And in that light people are painting Maj. Hasan to be part of a larger conspiracy and part of homegrown terrorism, which is far from the truth."

Ahmed regrets that the American public and politicians are taking emerging details about Hasan and using them to unfairly paint sweeping red flags over the entire Muslim community, estimated at seven millions.

"Muslims by definition are compassionate people."

The FBI has asserted that the shooting spree was not part of a broader terrorist plot and that there was no evidence of any co-conspirators.

Officials said communications between Hasan and Al-Awlaki were investigated in December and found to be explainable by his research.

Imam Rauf, who has worked for years in multi-faith, bridge-building projects, said a rush to judgment against the larger American-Muslim community is not what the media and public should be engaging in right now.

"I am very concerned that this incident is igniting negative reaction from too many Americans against the Islamic faith and Muslim Americans," he said.

"Our fellow Americans should understand that every major American Muslim organization has condemned it in no uncertain terms," Rauf recalled.

"Thousands of American Muslims serve in the US armed forces, and they are essential to the US goal of bringing peace, stability and democracy to Iraq and Afghanistan."