Whats up in Afghanistan 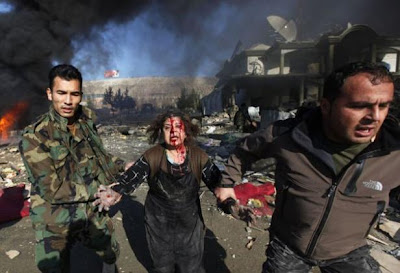 More Afghans are dying in their country's bloody insurgency than at any time since 2001, a new UN report says, thanks largely to the Taliban's use of indiscriminate roadside bombs and suicide attackers. The findings released yesterday came as at least six civilians were shot dead in Helmand and a series of bomb attacks around the country killed or wounded bystanders.

According to the UN, at least 2,412 civilians were killed last year and a further 3,566 wounded as a direct result of the war between Taliban-led insurgents and the Western-backed government. This could, however, be a fraction of the true total: human rights advocates say many families caught up in the insurgency live in areas too dangerous for researchers to collect information on casualties.

In the latest incident in Helmand province on Sunday, witnesses claimed that Nato and Afghan forces opened fire after a protest of about 2,000 people turned violent. One of the demonstrators, Haji Jan Gul, said his son was killed after throwing stones at foreign and Afghan troops. Nato insisted its soldiers did not fire on the crowd, saying the only shot from its troops had hit and killed an enemy sniper. But the incident, triggered after rumours spread that foreign troops had burned a copy of the Koran during a raid, served as a sharp reminder of the tensions between the foreign forces and civilians in one of the most volatile parts of the country.

Elsewhere a truck bomber wounded several civilians in the southern province of Kandahar, and a civilian was killed when a bomb he was trying to defuse exploded.

The biggest culprits, according to the report, are the Taliban and their allies, whom the UN holds responsible for 67 per cent of all civilians reported killed last year, a total of 1,630. More than a thousand were blown up in roadside bombs and suicide attacks targeting the Afghan government and its international backers.

Furthermore, the UN said that the Taliban deliberately targeted civilians with "assassinations, abductions, and executions if they are perceived to be supportive of, or associated with, the Government or the international community". The Taliban criticised the findings, claiming the US Department of Defence had leant on the UN to massage the figures.

"These suicide attacks and roadside bombs most often kill innocent Afghans, not international forces," Mudassir Rasuli, an Afghan human rights advocate, said. "They are not in the way of Islam and they are against international law. This indiscriminate disregard for lives must stop."

Civilian deaths caused by Western troops fell 28 per cent last year, a vindication of US General Stanley McChrystal's policy of restricting the use of air strikes as part of his reinvigorated hearts-and-minds campaign. Even so, 359 civilians were still killed in air strikes. In one of the most controversial incidents, German forces called in a strike on two fuel tankers hijacked by the insurgents and surrounded by civilians siphoning off petrol. Gen McChrystal has reassured President Hamid Karzai, a fervent critic of the coalition's use of air strikes, that everything will be done to protect civilians. Yet he is also the architect of the troop surge that will see 37,000 more foreign soldiers arrive in Afghanistan this year, which will almost certainly result in an increase in violence.