Science and Islam: Past and Present 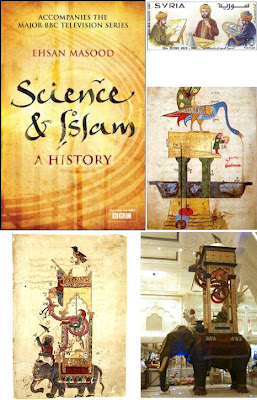 The Festival of Muslim Cultures, a year-long extravaganza of events across the UK, was aimed at showing how creative innovation is central to the British Islamic landscape. In 2006 the Museum of Science & Industry in Manchester opened its doors to 1001 Inventions, an exhibition showcasing leading-edge scientific discoveries from the Middle Ages. This exhibition has since toured the world and will open at the Science Museum in London next week. The BBC created a landmark TV and radio series called Science and Islam, written and presented by Professor Jim Al-Khalili of the University of Surrey. And there have been landmark books, including Jonathan Lyons’ The House of Wisdom: How the Arabs Transformed Western Civilization and the historian George Saliba’s Islamic Science and the Making of the European Renaissance.

Many of these activities are designed to fill in what the University of Manchester scientist and historian Salim Al-Hassani calls "missing history"— the often remarkable stories of discovery and invention; arguments about science and religion; colourful characters; and dazzling gadgetry during a mini scientific renaissance that lasted from the 8th to the 15th centuries, a time when Islam’s many empires were at their peak. Non-Western cultures contributed a huge amount to science and technology.

What are these contributions? Indian numerals, the decimal place, algebra; as well as developments in astronomy, optics, chemistry, surgery, the organisation of healthcare and higher education; even toy-making. These and more have come to us via Latin translations of Sanskrit, Arabic and Persian manuscripts. One Arabic medical textbook called The Canon of Medicine was taught to medical students in Europe’s elite universities for five centuries until the late 1600s. One of the most remarkable of the many technologies that will be displayed at the Science Museum is an early clock shaped like an elephant that uses water pressure to tell the time. It was designed by al-Jazari, a Turkish engineer from the early 13th century.

Not all the leading scientists of the day were part of the religious mainstream — and some could even be said today to be sceptical. However, what is not in doubt is that the demands of religion were among the driving forces behind scientific discovery during the Islamic Age. This was particularly the case in astronomy. Mosques, for example, employed amateur astronomers whose job included being able to compute accurate tables for times of prayers. One of the most celebrated of the mosque-based astronomers is Ibn al-Shatir, who worked in the Great Mosque in Damascus in the 15th century — his sundial can still be seen by visitors.

Another example of how faith influenced discovery can be seen in the work of the mathematician Musa al-Khwarizmi. He was a kind of chief scientific adviser to al-Mamun, the ruler of one of the earliest Islamic empires, based in Baghdad in the early 9th century. According to one story, al-Mamun commissioned his adviser to think of a neat way to calculate inheritance values, because Islamic rules on inheritance are anything but straightforward. Al-Khwarizmi suggested that inheritance formulae could be described using equations and set these out in a chapter of his signature book on algebra, Kitab al-jabr, or the book of algebra.

The 1001 Inventions exhibition — and the recent books and other events — emerges from a desire to convey a more rounded picture of Muslim cultures, ancient and modern; and to reinforce the idea that societies that embrace diverse ways of looking at the world are often the most innovative, exciting and forward-thinking places to live in.

On many levels, the sum of these parts has been a big success. But at the same time, in one crucial aspect, we have failed. Throughout Europe, small but significant numbers of people continue to believe that Muslims are members of a barbaric sect that oppresses women and children and refuses to live in the modern world. And it appears that the numbers of people who think this way could be increasing. At the very least, their voices are becoming more influential. Since 2005, members of the UK far Right have been elected to the European Parliament; across Europe, public opposition to mosque-building is getting louder.

Acknowledging the role of Muslim cultures to the making of the modern world is an important thing to do, but it is clear that this is not going to convince the sceptics. To do this we need to find another way.

Last year the British Council began a programme of activities — called Our Shared Europe — to highlight Islamic contributions to Europe (past and present). Its aim is to strengthen the trust between Europe’s Muslim communities and wider society. Research to measure how sceptical audiences in EU member states might react to such a programme revealed that a straightforward portrayal of Islamic contributions to Europe was by itself not sufficient in hacking through the walls of mistrust.

A professor from the Netherlands summed up the problem by saying that the story of Islam and Europe is as much about wars and conflict as it is about scientific and cultural exchange. If you want people to acknowledge one, he said, there needs to be space to discuss the other.

What does this mean in practice? It means providing more context when discussing Islam’s scientific luminaries and their achievements. For example, when we say that The Canon of Medicine is an example of the successful transfer of knowledge from East to West, we should perhaps also say that many European commentators were not very polite about the author Ibn Sina (Avicenna). One writer described the book as "Arab lies". Another commentator accused Ibn Sina of being "part of that filthy and wicked Muhammadan sect which legitimises divorce and takes the view that all miracles have a natural explanation".

Similarly, it is often said that the 9th-century ruler al-Mamun was an important scientific patron and rationalist thinker. And it is true that without his funding important developments such as algebra might have taken longer to materialise. But in celebrating his contributions to science we also need to acknowledge that al-Mamun was despotic, intolerant of those who did not share his rationalist philosophy and actively waged wars against Byzantium.

Over the past five years large strides have been made in the public understanding of Islamic contributions to the arts and sciences and such work needs to continue. Many readers of books and visitors to museums will become more knowledgable, which is a good thing. But the fact that Islamic scientists from the Middle Ages invented clocks, cameras and crankshafts is unlikely on its own to change the mind of someone whose image of modern-day Muslims is much less flattering. Shifting perceptions is a far harder task.

Few figures in Islamic scientific history are more colorful or intriguing than three brothers: Jafar-Muhammad, Ahmad and al-Hasan. They lived in Baghdad in the time of the Abbasid Caliph al-Mamun in the early 9th century, and have come to be known collectively as the 'Banu Musa brothers', Their father, Musa ibn-Shakir, is reported to have been a highwayman when he was young, but somehow he managed to put his past behind him, becoming not only an astronomer and astrologer but a close friend of the Caliph Harun al-Rashid-himself. He died young, leaving three small sons. Harun's son, the Caliph al-Mamun, patron of science and rationality, made a point of looking after them.

As the young boys grew up, they were given the run of al-Mamun's House of Wisdom, and they clearly made the most of it. They were all brilliant scholars, and did much to stimulate the translation project, sending out envoys and paying small fortunes to retrieve manuscripts from the Byzantine Empire and elsewhere. They quickly mastered Greek and were soon writing their own important treatments of the maths of cones and ellipses, building on the work of Apollonius. They were also accomplished astronomers, and at al-Mamun's request were able to make an accurate measurement of the earth's circumference. Yet, apart from their reputation for stirring up trouble, what really made their name was the wonderful machines and devices they created to delight the Baghdad court.

The Banu Musa may well have designed industrial or scientific machines, but if so they are lost. What we do know of their work is that they designed toys. They describe 100 of their devices in a work called the Book of Artifices written in 830, and each one that historians have so far examined is a masterpiece of ingenuity. Fountains that change shape by the minute, clocks with all kinds of little gimmicks, trick jugs, flutes that play by themselves, water jugs that serve drinks automatically, and even a full-size mechanical tea girl that actually serves tea. Such devices still astonish today when they are reconstructed, but they must have made al-Mamun's court gasp with wonder and delight.

Although they are just toys, the inventiveness that the Banu Musa put into them is impressive, as is the ground-breaking technology in one area of engineering: the field of automation. By making clever use of one - or two-way self-closing and - opening valves, devices for delaying action and responding to feedback, and simple mechanical memories, they created automatic systems which are no different in principle from modem machines. They used mainly water under pressure rather than electronics, but many of the operating principles are the same.

The idea of using water pressure to achieve automation reached its pinnacle in the development of clocks. The need to know what time to pray was a crucial spur in Islam to the development of water clocks which could keep the time through day and night. Water clocks such as that of al-Zarqali in Toledo (11th century) became the wonders of the age.

One extraordinary device is a water clock in the shape of an elephant, designed by an engineer called Badi al-Zaman al-Jazarj and illustrated and described in his Book of Ingenious Devices (1206). The elephant clock combined water principles' from Archimedes with an Indian elephant and water timer, Chinese dragons, an Egyptian phoenix, a Persian carpet and Arabian figures.

Al-Jazari was born in the region of al-Jazira between the Tigris and Euphrates in the 12th century. This was a-time when the Turkic-speaking peoples were already beginning to make this part of the world their own, and in 1174 he went to work for the Banu Artuq, the rulers of Amid (now known as Diyar Bakir in southern Turkey). There may have been many engineers as talented and as innovative as al-Jazari, but he was also a skilled communicator who could write and draw too. He must have been an old man, though, when the Prince of Amid, Nasir al-Din Mahmud, ordered him to write his book, for within a few months of completing it he was dead.

Researchers are just beginning to go through this book, which seems to be the culmination of Islamic mechanical technology, to try out some of these machines - either on computers or by building models according to al-Jazari's designs. What they are finding is beginning to cause quite a stir.
Posted by Zafar Khan at 09:09