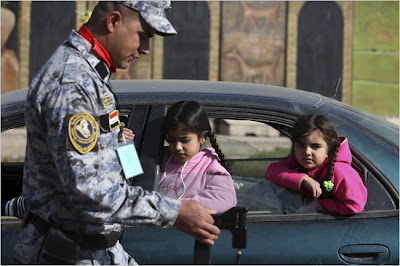 The owner of a British company that supplies questionable bomb detectors to Iraq has been arrested on fraud charges, and the export of the devices has been banned, British government officials confirmed Saturday.

Iraqi officials reacted with fury to the news, noting a series of horrific bombings in the past six months despite the widespread use of the bomb detectors at hundreds of checkpoints in the capital.

But the Ministry of the Interior has not withdrawn the device from duty, and police officers continue to use them.

Iraqi officials said they would begin an investigation into why their government paid at least $85 million to the British company, ATSC Ltd., for at least 800 of the bomb detectors, called ADE 651s.

The British Embassy offered to cooperate with any Iraqi government investigation.

The New York Times first reported official doubts about the device in November, citing American military officials and technical experts who said the ADE 651 was useless, despite widespread reliance on it in Iraq.

The ADE 651 is a hand-held wand with no batteries or internal electronic components, ostensibly powered by the static electricity of the user, who needs to walk in place to charge it. The only moving part is what looks like a radio antenna on a swivel, which swings to point toward the presence of weapons or explosives.

“We are conducting a criminal investigation and as part of that a 53-year-old man has been arrested on suspicion of fraud by misrepresentation,” a spokesman for the Avon and Somerset Police in England said, without giving the suspect’s name in line with police policy. The suspect was released on bail, the spokesman said.

“The force became aware of the existence of a piece of equipment around which there has been many concerns and in the interests of public safety launched its investigation,” the police spokesman said.

The suspect’s identity was widely reported in the British press as Jim McCormick, managing director of ATSC Ltd., which operates out of a converted dairy in rural Somerset County, England. News reports described Mr. McCormick as a former British police officer from Merseyside.

Contacted by telephone, Mr. McCormick refused to comment on the charges or the case against him, but he insisted that ATSC would remain in business. “Our company is still fully operational,” he said.

A statement issued by the British Department for Business, Innovation and Skills said it was banning export of the ADE 651 and similar devices to Iraq and Afghanistan.

“Tests have shown that the technology used in the ADE651 and similar devices is not suitable for bomb detection,” the department said. “We acted urgently to put in place export restrictions which will come into force next week.” The statement said the department could ban export to those countries because British troops there could be put at risk by the device’s use. ATSC claims to have sold the device to 20 countries, all in the developing world.

The Supreme Board of Audit in Iraq announced it would investigate the procurement of the ADE 651, according to the board’s leader, Abdul Basit Turki. The investigation will focus on officials who previously assured auditors the device was technically sound, he said.

Maj. Gen. Jihad al-Jabiri, who is in charge of procuring the devices for the Ministry of Interior, could not be reached for comment.

In Baghdad on Saturday, the devices were still very much in use. “I didn’t believe in this device in the first place,” said a police officer at a checkpoint in central Baghdad, who spoke on the condition of anonymity because he was not authorized to speak to the media. “I was forced to use it by my superiors and I am still forced to do so.”

Another checkpoint officer said he blamed corrupt officials for bringing the ADE 651 in. “Our government is to be blamed for all the thousands of innocent spirits who were lost since these devices have been used in Iraq,” he said.

An associate of ATSC, who spoke on the condition of anonymity for fear of retaliation, said the devices were manufactured at a cost of $250 each by suppliers in Britain and Romania. “Everyone at ATSC knew there was nothing inside the ADE 651,” he said.

The Iraqi government, according to its auditors, paid $40,000 to $60,000 for each device, although it determined that ATSC was marketing the device for $16,000. The additional money was said to have been for training, spare parts and commissions.

The Times of London quoted Mr. McCormick in November as saying that the device’s technology was similar to that of dowsing or divining rods used to find water. “We have been dealing with doubters for 10 years,” he said. “One of the problems we have is that the machine does look primitive. We are working on a new model that has flashing lights.”

Shortly after the arrest on Friday, the BBC reported that it had arranged a lab test of the device and found that its bomb-detection component was an electronic merchandise tag of the sort used to prevent shoplifting.

ATSC’s brochures claim the ADE 651 can detect minute traces of explosives, drugs or even human remains at distances of up to 6 miles by air, or three-fifths of a mile by land. Scientific trials of similar devices have shown that they are no more accurate than a coin toss.