Jewish sage who was married to 17 women arrested 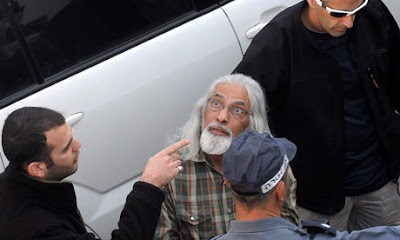 Israeli police have arrested a self-styled Jewish sage and disciplinarian who ran a tightly controlled cult of at least 17 women with whom they believe he fathered dozens of children.

Goel Ratzon, whose name means "saviour" in Hebrew, is now on remand in a Tel Aviv jail awaiting a court appearance.

Police painted a disturbing picture of a man who commanded his household according to a "rulebook", laying down severe restrictions and financial penalties for the women in his life. Many of the women, who dressed in conservative Orthodox clothes, appeared deeply committed to him. Some bore tattoos of his name and face. His lawyer said he denied any wrongdoing and all his relationships were consensual.

Ratzon appeared in an Israeli television documentary last year which showed dozens of women and children in the house. Several of the women then said they were married to Ratzon and they were shown combing his hair and feeding him. They threatened to kill themselves if anyone ever tried to harm their leader.

One said: "He is the messiah everyone is talking about. He is already here and he hasn't been revealed yet. The day he decides to reveal himself, the land will shake." His children all had names that were variations on his, Goel. Police believe he may have fathered up to 40 children with the women.

During the documentary, Ratzon, who has long white hair and a thick white goatee, said of himself: "I'm perfect. I have all the qualities a woman wants."

An undercover investigation was started in June last year after one woman came forward to complain of abuse. Police then raided the house in Tel Aviv, arresting Ratzon this week. He has not been formally charged but is being held on suspicion of enslavement, rape and extortion. A gagging order was imposed on the press, as is common in major police inquiries here, until today.

Found in the house was a rulebook setting out a strict code of conduct for the women, with different financial penalties for infringements. "No women shall marry nor shall any woman attack another, either verbally or physically," said the first rule. The fine was listed as 2,000 shekels (£33). Other rules banned conversation anywhere but the living room and stopped the women from asking Ratzon questions. "No woman shall sit idle when there are dishes to be washed, cleaning to be done, children to look after," said another.

"The evidence shows the suspect controlled his women with a firm hand, including their possessions and their money," said a police statement. "He would dictate what they could and could not do, limit their movements and impose sanctions and various punishments, including the use of violence if they refused to obey."

Ratzon's appointed lawyer, Shlomtzion Gabai, said around 30 women and 60 children were involved with him. "As far as he is concerned, no sexual crimes have been committed," she told Israel Radio. "The women consented willingly to relations … He may be different, but he's not a criminal."

The children have been turned over to the authorities and some of the women have been let free. Ratzon appeared to have at least three apartments, which were dark, overcrowded and filthy.