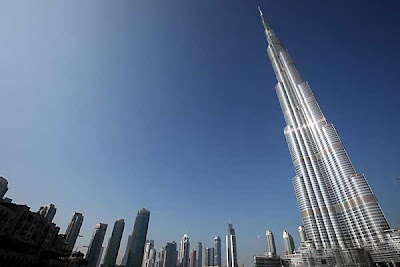 The world’s tallest skyscraper – boasting 1,000-plus luxury apartments and a hotel designed by Giorgio Armani had last-minute name change from Burj Dubai (“Dubai Tower”) to Burj Khalifa. Sheikh Khalifa bin Zayed al Nahyan is the head of Abu Dhabi and president of the United Arab Emirates, which includes Abu Dhabi, Dubai, and five other emirates (or city-states).

Certainly the Burj Khalifa is meant to outshine Dubai’s many superlative projects so far, including a self-proclaimed seven-star hotel. The Dubai Tower’s 160-stories reach 828 meters high (2,716 feet) – a height kept secret until the opening Monday night.

The towering statistics, by contrast, have spilled across the media. It’s so tall that it’s visible from 60 miles away, reports say, and the temperature drops 6 degrees from base to peak. Winds at the top can reach 90 miles an hour. The highest floor offers views of Iran. Its elevators will travel the world’s longest distance. Its nightclub on the 143rd floor is the world’s highest; above it, on floor 158, the world’s highest mosque.

Throughout the day, government-owned channel Dubai One interviewed a parade of people praising the Burj Khalifa and showed montages of Sheikh Mohammed illustrating his vision and generosity – as well as an apparent penchant for constructing new buildings.

In one clip he urged 10,000 new housing units. In another, he sat down on a road to chat with a resident whose neighborhood had been damaged by rains and ask him what he needed. “My house needs repairs,” the man told him. “We won’t repair it,” Sheikh Mohammed told him. “We will build a new one.”