Construction of higher buildings and Signs of Last days 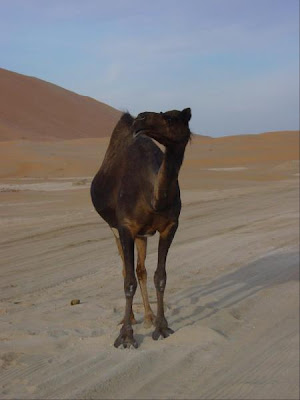 We were made aware of the following hadith which is quite interesting.

1. When a slave (lady) gives birth to her master.

2. When the shepherds of black camels start boasting and competing with others in the construction of higher buildings. And the Hour is one of five things which nobody knows except Allah.

The Prophet then recited: "Verily, with Allah (Alone) is the knowledge of the Hour--." (31. 34) Then that man (Gabriel) left and the Prophet asked his companions to call him back, but they could not see him. Then the Prophet said, "That was Gabriel who came to teach the people their religion." Abu 'Abdullah said: He (the Prophet) considered all that as a part of faith.

The black camels are popular in Arabian peninsula and are not uncommon in Saudia Arabia and UAE. Maybe the hadith refers to them as they are busy competing by building taller buildings and grand structures.
Posted by Zafar Khan at 18:23