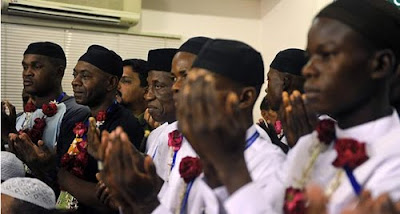 Highly-impressed by the Muslim culture and the Pakistani hospitality, six visiting Central African Republic, (CAR), and three Cameroon boxers and their coach converted from Christianity to Islam at a simple ceremony in a Karachi hotel on Tuesday.

According to a news story posted with byline Shazad Ali on web news portal www.dawn.com the six pugilists from CAR – Gbodo Ygor, Selebangue Bienvenu, Vomitiande Huges, Grassa Thibault, Niambongui Davy and Ngocko Martial – had announced on Monday there wish to be converted to Islam.

However, three Cameroon boxers, Ketchemi Joseph Justin, Mendoua Blase, Mulema Joseph and their coach Tchuem Justin also embraced Islam along with the six from CAR on Tuesady. The conversion ceremony was also attended by CAR coach Mohamed Kalambaye who is a born Muslim.

The nine African boxers and coach Justin, who were attired in crisp white kurta shalwar (shirt and baggy trousers), were garlanded and offered sweets by the organisers of the boxing tournament after they converted to Islam.

The nine boxers and the Cameroon coach are in Karachi to participate in the ongoing Benazir international boxing tournament.

Kalambaye said the three Cameroon boxers and their coach joined them when the CAR pugilists were about to convert to Islam, the website said.

When they (Cameroon boxers and coach) saw how I am being greeted by everyone here, they were impressed. And when they came to know that six of our boxers are about to convert to Islam, they also joined them. This is how they also converted to Islam,' Kalambaye told Dawn.com.

Kalambaye said that his boxers have converted to Islam on their free will and without being instigated by him or anybody else and the pugilists were impressed by the teachings of Islam and Pakistan's hospitality.

All our boxers have converted from Christianity to Islam by heart and there was no compulsion on them,' Kalambaye reportedly said. "I am a Muslim since my birth and know there will be no problems for these boxers back home", he said.

While the Central Africans were impressed by the local hospitality, they were also inspired when they saw their coach being greeted and welcomed warmly by the locals.

However, according to Kalambaye the African boxers in fact were even more impressed with Islam since it does not discriminate on the basis of cast, creed or colour of skin.

The event was overseen by chief cleric of the Jamia Binnoria institute Mufti Naeem at a local hotel. Naeem termed the occasion an “historic event.”

“This is a historic event. I have travelled round the world but have never seen so many people embracing Islam at one time. This proves Islam is an exemplary religion and teaches humanity,” said Naeem.“No one can impose religion on anyone by force and I hope these boxers further study the religion and become good humans and Muslims,” he added.

While Islamophobia has been increasing in the West because of terrorism and religious extremism, it was a unique incident in Pakistan where visiting sportspersons from foreign Christian-dominated countries have converted to Islam, the report said.

It may be mentioned here that the ongoing boxing event is the first-ever international sporting event to be staged in Pakistan since the attacks on the visiting Sri Lankan cricket team in Lahore some 10 months ago. (pervezbari@eth.net)