Shia Sunni Politics back in Iraq 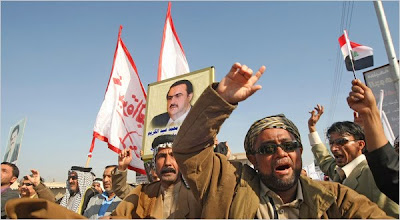 Iraq's electoral commission has barred 500 candidates from running in March's parliamentary election, including a prominent Sunni lawmaker, in a decision that is sure to deepen Iraq's sectarian divides.

Hamdia al-Hussaini, a commissioner on the Independent High Electoral Commission, said the commission made the decision after receiving the list from a parliament committee that vets candidates for ties to Saddam Hussein's outlawed Baath party.

The decision to bar the candidates – most of whom are believed to be Sunni – potentially threatens the country's fragile security because it risks leaving Sunni voters feeling targeted and disenfranchised. The Sunni boycott in a January 2005 election is considered one of the key factors that deepened the insurgency. The candidates have three days to appeal, al-Hussaini said. Among those barred is prominent Sunni leader Saleh al-Mutlaq.

Some of the most prominent Sunni politicians, fixtures for years on Iraq’s fickle political landscape, have been made targets, apparently for supporting Saddam Hussein’s Baath Party. Among them were Defense Minister Abdul-Kader Jassem al-Obeidi and Saleh al-Mutlaq, the head of the National Dialogue Front, whose alliance with Ayad Allawi, a former prime minister, was expected to fare well in Sunni provinces that were underrepresented in the last election in 2005.

The dispute began last week when Iraq’s Accountability and Justice Commission said it would disqualify more than a dozen candidates and political parties. The eventual list sent to electoral officials had about 500 names, out of 6,500 candidates. Hundreds more will be disqualified Monday, said Falah Shanshal, a Shiite lawmaker whose committee oversees the commission’s work.

“The commission’s work was very professional,” he said. “All the documents were carefully checked. They did a great job.”

Critics, though, have questioned the very legality of the Accountability and Justice Commission. It inherited the responsibilities of the contentious and now-disbanded de-Baathification committee, but Parliament has yet to approve its members, leaving the previous staff, including its director, Ali Faisal al-Lami, as powerful caretakers.

Hardly anyone seems to believe that the commission acted on its own. That lack of transparency has given rise to a raft of conspiracy theories in Baghdad that has already frayed electoral alliances, in particular Mr. Mutlaq’s coalition with Mr. Allawi. More troubling, it has hampered efforts to reach a compromise, politicians and diplomats say, because no one seems to know who is driving the campaign.

“That’s one of the main problems,” said Dr. Othman, the Kurdish lawmaker. “These decisions are being made behind closed doors.”

Electoral officials say the candidates will have three days, beginning Monday, to appeal the decision before a seven-judge panel approved by Parliament. Some Iraqi officials, along with United States and United Nations diplomats, hope those appeals can secure a last-minute compromise, not unheard of in a political system accustomed to brinkmanship.

But in Baghdad’s Sunni neighborhoods, and predominantly Sunni provinces to the north and west of the capital, where anti-Baathism is often seen as coded language for a campaign to disenfranchise Sunnis, many viewed the disqualifications as an indictment of Iraq’s fledgling institutions and their attempt to portray themselves as representative.

The dispute has highlighted an issue that remains unresolved in Iraq: to what degree will members of the banned Baath Party be reincorporated in public life.