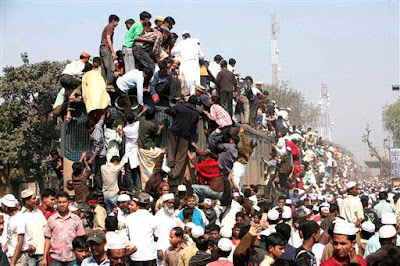 More than two million Muslims from around the globe are descending on Bangladesh for the world’s second largest Muslim gathering after hajj.

"After the Hajj, the biggest Islamic gathering is this Bishwa Ijtema,” Alamgir Hossain told Geo Television Network on Saturday, January 23.

Hossain joined two million Muslims on the banks of the river Turag on the outskirts of the capital Dhaka to attend the Bishwa Ijtima, or the World Muslim Congregation.

Dressed in traditional Islamic robes and prayer caps, the faithful spend time in prayers and meditation.

They discuss the Noble Qur’an, attend lectures given by scholars from around the world and share notes on ways to spread Islam's message.

Political discussions are not allowed at the three-day gathering.

Many of the faithful traveled by dangerously overcrowded buses and ferries and endured long delays and dense fog to reach the site from far-flung rural villages.

Security was tight to ensure the safety of the worshippers.

"Members of the police are everywhere, thousands of policemen are engaged everywhere to maintain law and order in this 'ijtema' area,” police officer Abdus Sattar said.

“Rapid Action Battalion, members of the army are engaged here, helicopter are also above.

“We have taken very strong security measures here for the devotees so that none can create problems."

Hossain is praying for world peace and welfare of Muslims worldwide.

“Millions of Muslims have gathered here to pray together for the peace of the world's Muslims,” he said.

“I am also here to join the prayer to pray for myself and for the peace of world.”

The gathering will end on Sunday, January 24, with a final prayer to be led by Indian scholar Maulana Jobayerul Hasan.

Bishwa Ijtema was first held in the 1960s by Tabliq-e-Jamaat, a political group that urges people to follow the Islamic teachings in their daily lives.

With a population of 144 million, Bangladesh is the world's third-largest Muslim-majority nation.

Email ThisBlogThis!Share to TwitterShare to FacebookShare to Pinterest
Labels: Bangladesh