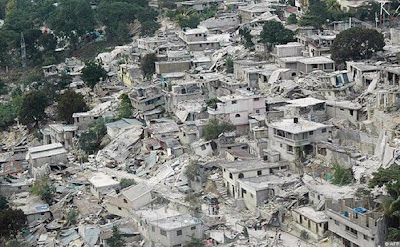 Up to 200,000 people are feared dead as a result of the 7.0 magnitude earthquake that has destroyed much of the Haitian capital Port-au-Prince, officials in the Caribbean country say.

Lorries piled with corpses have been trying to collect the bodies that have been visible on the streets across Port-au-Prince for burial in mass graves outside the city.

Lots of Muslim Organisations are collecting charity for Haiti Victims and it is duty of Muslims to help other people in the world whenever they can. Please donate to your local Islamic organisations. If they are not collecting money then please use other organisations like Christian Aid, Red Cross, etc.

To learn more about Islam and Muslims in Haiti, see here.
Posted by Zafar Khan at 09:57