Christian Fundamentalists coming out of closet over Iraq War 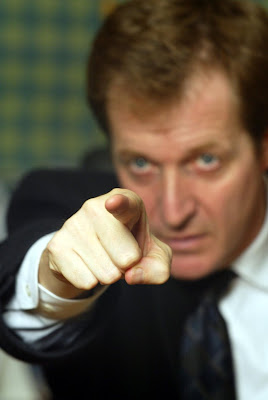 While Tony Blair was in office, he avoided bringing up the subject of religion but nearly every pundit knew that he was a staunch fundamentalist christian. Before the Iraq war, Bush and Blair prayed together and Tony Blair has never denied it. I wonder if they were praying that their power does not gewt taken away regardless of them embarking on a war that will kill hundreds of thousands and makes millions homeless.

If two Muslim leaders prayed together before starting a war, how would the world react?

In the winter of 2003, when George Bush and Tony Blair were frantically gathering support for their planned invasion, Professor Thomas Römer, an Old Testament expert at the university of Lausanne, was rung up by the Protestant Federation of France. They asked him to supply them with a summary of the legends surrounding Gog and Magog and as the conversation progressed, he realised that this had originally come, from the highest reaches of the French government.

President Jacques Chirac wanted to know what the hell President Bush had been on about in their last conversation. Bush had then said that when he looked at the Middle East, he saw "Gog and Magog at work" and the biblical prophecies unfolding. But who the hell were Gog and Magog? Neither Chirac nor his office had any idea. But they knew Bush was an evangelical Christian, so they asked the French Federation of Protestants, who in turn asked Professor Römer.

he best opinion is that like all Bible prophecy, it is a mixture of wish-fulfilment and contemporary (iron age) politics. Some of it at least seems to refer to the turmoil brought about by Alexander the Great in the fourth century BC (unlike Bush, Alexander actually conquered Afghanistan). But they have been for the last two hundred years the subject of increasingly excited evangelical fanfic, especially in America; in the 70s and 80s, Gog was meant to be Russia. Ronald Reagan seems to have believed that.

But with Reagan, the prophecy appreciation part of his brain functioned quite independently of the part that started wars (there's nothing in the Old Testament about Nicaragua or even Grenada). Bush seems to have taken the threat of Gog and Magog to Israel quite literally, and, if this story can be believed, to have launched a war to stop them.

Mr Blair has previously admitted that he was influenced by his Christian faith, but Mr Burton reveals for the first time the strength of his religious zeal.

"While he was at Number 10, Tony was virtually gagged on the whole question of religion," says Mr Burton.

"Alastair [Campbell] was convinced it would get him into trouble with the voters.

"But Tony's Christian faith is part of him, down to his cotton socks. He believed strongly at the time, that intervention in Kosovo, Sierra Leone – Iraq too – was all part of the Christian battle; good should triumph over evil, making lives better."

Mr Burton, who was often described as Mr Blair's mentor, says that his religion gave him a "total belief in what's right and what's wrong", leading him to see the so-called War on Terror as "a moral cause".

"I truly believe that his Christianity affected his policy-making on just about everything from aid to Africa, education, poverty, world debt and intervening in other countries when he thought it was right to do it.

"The fervour was part of him and it comes back to it being Christian fervour that spurred him into action for better or worse."

Mr Burton says that inherent in Mr Blair's faith was the belief that people should be treated fairly: "He applied that same principle in everything he did – from establishing the Social Exclusion Unit to ethnic cleansing in Kosovo, and ridding Iraq of the evils of Saddam Hussein's rule."

It is a well known fact that Mr Blair's Cabinet included several deeply committed Christians, such as Ruth Kelly, the Education Secretary, who is a Roman Catholic, and the Chief Whip, Hilary Armstrong - but they rarely break the injunction not to mix religion and politics publicly.

Now, I read the most interesting stuff which I didnt expect.

Alastair Campbell said today he was inspired by the Bible when he gave evidence to the Iraq inquiry.

The former spin chief, who famously told Tony Blair: "We don't do God", said that on the eve of his appearance a supporter emailed him Psalm 56.

The psalm, which attacks those who "twist" the words of others, gave him comfort on a day when he was again in the media spotlight.

Mr Campbell quoted it on his blog, adding: "I never detected a death plot among the British media, but the rest of it sums up the Westminster lobby to a tee."

He revealed he was "amazed how many people, though they thought they know I don't do God, sent me passages from the Bible."

Its good to see all these liars and fundamentalists coming out of the closet and revealing their true face. I am sure that most common people do not see the Iraq war as the war between Islam and Christianity but day by day it looks to me thats what it is.
Posted by Zafar Khan at 08:59