How U.S. can keep its Muslims moderate 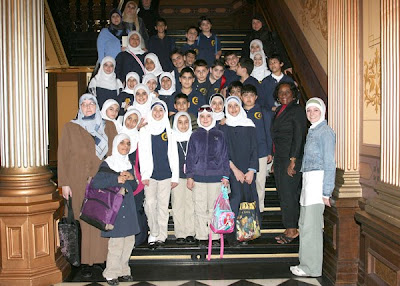 After the Christmas airliner attack, the recent spate of domestic terrorism arrests, and the Fort Hood shootings, people are understandably concerned about the possibility of homegrown terrorism involving Muslim Americans. But while the potential for this form of terrorism is real, it is largely overstated.

Together with University of North Carolina sociology professor Charles Kurzman and Duke religion professor Ebrahim Moosa, I have been studying Muslim Americans for the past two years to learn about how they deal with the threat of radicalization within their communities and to identify ways to help prevent homegrown terrorism in the future. We found that:

Muslim American organizations and the vast majority of individuals we interviewed firmly reject extremist ideology that justifies the use of violence to achieve political ends.

Muslim Americans have taken a number of positive steps to reduce the potential for radicalization in their communities. They have consistently spoken out against terrorist incidents. And they have counseled, and sometimes cast out from mosques and community groups, those expressing radical views.

Muslim Americans provide information to law enforcement about radical individuals who might engage in violence.

Muslim Americans feel the strain of living in America in the post-9/11 era. They perceive both official and societal discrimination, endure negative portrayals in the media, and worry about the many barriers to assimilation and participation in mainstream American life.

Muslim Americans are responding to these concerns with increased political activity, community-building activities, and the formation of a strong identity as a religious group.

Counterterrorism officials should take heed of these findings. Actions that distance Muslim Americans from mainstream society and increase social isolation will likely reduce cooperation with law enforcement and possibly contribute to the conditions that lead to radicalization.

To stave off this possibility, we should encourage Muslim American political participation, which provides an outlet for grievances and exposes the system to views that might otherwise be unheard. Political participation demonstrates to Muslims both here and around the world that, in America, nonviolent action can lead to positive social change. It is therefore important that both major political parties include Muslim Americans in their organizations and actively seek their support through the political process.

We also recommend that governments support community-building activities such as youth centers, public health clinics, housing initiatives, and child-care facilities. That would show Muslim-Americans that America cares about the strength and vibrancy of their communities, not just the contribution they can make to counterterrorism. And it may turn out that the contacts made with Muslim Americans will build the relationships that result in better counterterrorism intelligence. Such activities are especially important in isolated immigrant communities.

Additionally, tensions between Muslim Americans and law enforcement need to be addressed, especially in regard to the use of informants within Muslim American communities to build criminal cases. Some Muslim Americans view many of the cases brought against members of their community as instances of entrapment. A clearing of the air on this issue is urgently needed.

Law enforcement should develop a policy on when to use informants, especially when they are infiltrating sacred spaces such as mosques. This policy should be discussed with Muslim American organizations and strictly enforced. For their part, Muslim Americans must realize that the use of informants is a traditional, accepted law enforcement tactic that is appropriate in some cases.