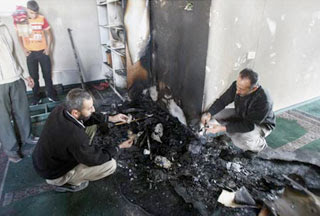 Israeli extremists torched the holy book of Islam, the Quran, and prayer mats in the Yasouf village mosque on December 11.

Israeli settlers in the occupied Palestinian West Bank have vandalised a mosque, torching its library and spraying hate messages in Hebrew on the building.

The attack blamed on hardline Jews on Friday may be linked to plans that seek to curb their illegal settlement activity on land taken from Palestinians.

Clashes erupted as villagers hurled stones at Israeli troops sent to investigate the incident at the mosque in the northern West Bank's Yasuf village. The security forces responded with teargas.

One of the Hebrew language slogans sprayed on a wall read: "Get ready to pay the price." Another read: "We will burn you all."

Village councillors and Palestinian security officials blamed Israelis from a nearby settlement for the attack.

The area is home to some of the most hardline settlers who advocate a "price tag" policy under which they target Palestinians in retaliation for any Israeli government measure they see as threatening Jewish settlements.

The Israeli military said "it appears that the suspects wrote hate-filled messages in Hebrew in addition to burning bookshelves and a carpet."

It assured the Palestinian Authority that it "views the incident gravely" and that security forces are working to locate the perpetrators, the statement said.

Last week, a house and three vehicles were set on fire in another village, also near the West Bank city of Nablus. The owner of the house told police he saw three Jewish settlers start the fires.

Settlers have expressed outrage over the government's decision to impose a 10-month moratorium on new building permits for Israeli homes in the occupied West Bank, outside annexed Arab east Jerusalem.

Many settlers consider they have a God-given right to live in the biblical Land of Israel, which includes the West Bank

Turkish Ministry of Foreign Affairs expressed in a statement its "deep concern" over the attack, saying it wanted perpetrators to be brought to justice soon.

Israel should prevent such attacks from reoccurring as they might further add tensions, the ministry said.

Israeli newspaperHaaretz reported that one of the two most senior religious leaders of Israel’s Jewish community paid a visit on Monday to the West Bank village of Yasuf, where a mosque was set on fire and covered with Hebrew graffiti last week. Israeli and Palestinian officials have blamed the attack on Israeli settlers.

According to Haaretz, Yona Metzger, Israel’s chief Ashkenazi rabbi, told residents, “I came here to expression my revulsion at this wretched act of burning a place holy to the Muslim people.” Agence France-Presse reportedthat that he drew an explicit comparison to Kristallnacht, the November 1938 attacks on Jewish synagogues and businesses in Nazi Germany. “Seventy years ago,” Rabbi Metzger said, “the Holocaust, the biggest tragedy of our history, began with the torchings of synagogues during Kristallnacht.”

The Associated Press reported that the rabbi continued: “There were hundreds of synagogues. They took all of the holy books out onto the street and burned them.” He added, “We are still living this trauma. And in the state of Israel we will not allow a Jew to do something like this to Muslims.”