The debate of women's dress 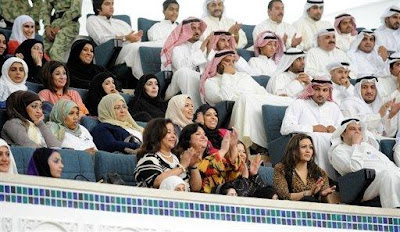 From The Times Online:

France is considering passing a law that would mean women who wear the burqa or niqab in public would face a £700 fine. French MPs will vote on the proposal later this month; the fine would apply to anyone “whose face is fully covered in public”. Jean-François Copé, parliamentary leader of Nicolas Sarkozy’s UMP group, told Le Figaro that the proposed law was based on sexual equality and public safety considerations, not on religious ones.

It is already illegal to wear a headscarf in French state schools (the law came into effect in 2004 — you’ll remember the furore); the French constitution specifically requires the separation of church and state. So even in a country that is nominally Catholic, there are no prayers at school, no crucifixes on state-school walls, no religious assemblies and so on.

This last bit seems perfectly sensible but the headscarf issue raised all sorts of questions — the law is opaquely worded and refers only to “ostentatious” religious symbols: would a Sikh boy in a French state school be required to remove his topknot and cut his hair, for instance? Would a Jewish child not be allowed his yarmulke? Would somebody who was vegetarian on religious grounds be offered no alternative to meaty school lunches? Or was the law just against Muslims, adherents to the second largest religion in France?

I find this whole subject uncomfortable because I don’t really know what I think; I change my mind constantly. I start off, as most people would, from the point of view that everyone should be allowed to wear what they like, regardless of how peculiar it might strike others as being, without being dictated to.

From the New Statesman Blog:

2) Why did the "French internal security services" commission a study on the burqa/niqab? Is it now deemed to be a national security risk? Do French intelligence agencies have nothing better to do with their time? No other threats to deal with, apart from 2,000 Muslim women with covered faces?

Then there is the matter of the clothing itself and distinguishing between the various types. I'm no fan of the burqa or the niqab myself, and have yet to be convinced of the Islamic legal reasoning behind either garment, but I do recognise the difference between the burqa and the niqab, on the one hand, and the hijab on the other.

It's not only in secular Europe where societies are trying to grapple with the highly emotive question of Islamic dress. Following the victory of four women in Kuwait's parliamentary elections, Islamists attempted to prevent two of them from taking their seats in the house for not wearing the hijab. After a legal battle, the country's constitutional court ruled that the women in question were not obliged to wear the Islamic attire.

Egypt has been at the centre of its own contentious debate, this time about the niqab, or face veil. The niqab, traditionally worn in parts of the Gulf and associated with Wahabi/Salafi Islam, has recently become popular in less-conservative Egypt.

The spread of religious satellite television, coupled with years of migration to the Gulf has helped import the burqa and the niqab into Arab countries where it was previously the preserve of a minority. My own sister, who grew up in Saudi Arabia, was aggressively dissuaded from wearing her niqab when she returned to live in Sudan, so alien was it to family and friends.

The niqab has become a flashpoint between Egyptian authorities and university students. In the latest episode this week, a Cairo court upheld a government decision to ban students from taking university exams while wearing the niqab. The government justified the ban by saying that it would prevent students, both male and female, from masquerading as someone else or concealing cheating aids.

The lawyer arguing the case against the ban told al-Jazeera that the decision "forces a woman to expose part of her body she doesn't want exposed. It is soul-crushing for these women."

This comes in the wake of Mohammed Sayyed Tantawi, the government appointed Grand Imam of al-Azhar, sought to ban the niqab in all campuses affiliated with the university. In an earlier decision, the court overturned a ban on the niqab in female students' dormitories despite allegations that men had been sneaking in under its cover.

The increasingly heated debate is tainted with political considerations. Although religion informs the spirit of jurisprudence in the country, Egypt is subject to tensions between the government and an Islamic political and social movement which is the most potent opposition force due to the lack of a moderate secular space within which to voice concerns.

The hijab has become politicised, with some viewing the increasing number of women choosing to cover as an indication of the rising influence of religion. Businessmen and ministers became embroiled in the debate when tycoon Naguib Sawiris and culture minister Farouk Hosni expressed alarm over the popularity of the head cover.

Any law circumscribing where the niqab can be donned is viewed as one that has an agenda, administered by an uneasy government eager to stamp it out both as a symbol of extremism and implicit opposition to the regime, dressing up a witch hunt in security concerns. The Egyptian Initiative for Personal Rights' executive director, Hossam Bahgat, certainly views it as such, stating that "choosing the most excessive measure is a continuation of a policy which clearly penalises students who wear the niqab for their beliefs".

The Egyptian government has certainly taken measures which betray this fear. Amr Khaled, a popular televangelist who is credited with converting many Egyptian and Arab women to the hijab is widely believed to have been forced into exile by the government.

I am averse to any legislation which dictates what women are allowed to wear as much as I am averse to the niqab. Although there is little consensus over its religious obligatory nature, this is a red herring that detracts from the more important question of personal liberty. However, there are situations where a full face cover poses security and identity questions. Freedom is not absolute when it encroaches upon the rights of others. Covering one's face whether that person is a man or a woman has simple practical ramifications.

In countries such as Saudi Arabia, where the majority of the female population wears the niqab in a segregated public and official space, there are few situations where women would need to take it off in the presence of men for needs of identification. At airports, there is a dedicated shielded cubicle where women unveil to female security staff, exams are invigilated by other women in women-only halls and banks have bespoke ladies' branches. In Egypt, where official gender apartheid does not exist nor is it practical that such provisions are made for a minority, the legislation must negotiate the fine line between considerations of fraud and personal freedom.

However, this process is rarely devoid of emotive and political considerations. It's never really about what women wear, but about the values that women's dress implies – whether it is the niqab in Egypt, the hijab in Kuwait, or Lubna Hussein's trousers