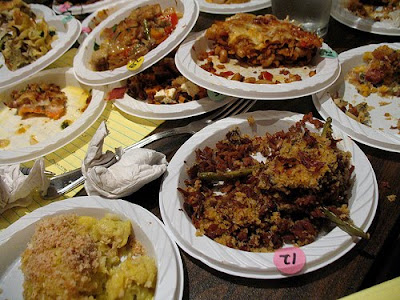 Egyptians' food purchases during Ramadan soar beyond all other monthly consumer averages, straining the efforts of ministers concerned with supply and domestic trade to keep up with demand. According to a recent study by the National Centre for Social and Criminal Research (NCSCR), 83 per cent of Egyptian families alter their food consumption habits during Ramadan in a way that augments their food bill for this month by 50 to 100 per cent. If total annual consumer spending in Egypt comes to around LE200 billion, LE30 billion of this is spent in Ramadan, which is to say at a rate of LE1 billion a day, the bulk of which goes to food in this month of "fasting".

According to statistics from the National Census Centre, in the first week of Ramadan Egyptians consume 2.3 billion loaves of bread, 10,000 tonnes of fuul, 40 million chickens, 200 per cent more yoghurt and ghee, and some LE9 million worth of dried fruits, which accounts for 35 per cent of the annual trade in this festive staple. Across Egypt's 28 governorates, the National Natural Gas Authority has to pump out 20 per cent more natural gas, and the same applies to water. In addition, the peak hours for electricity consumption rise to between four and five hours, up from two to three hours per night the rest of the year. Much of this can be chalked up to Ramadan lighting decorations and, specifically, illegal taps into the grid in order to feed the decorations hoisted up in alleyways or even large squares.

Then there are the medical studies that indicate that the general state of public health declines during this month. In spite of the fact that there are only two meals a night during Ramadan, the Iftar at sunset and the Sohour before sunrise, medical authorities report higher rates of diabetes and cardiovascular illnesses due to overindulgence in fats and sweets. Some medical statistics also point to an increased consumption of over- the-counter medications related to digestive disorders, from stomach ulcers to colitis.

If the above facts and figures tell us anything it is that over-consumption during Ramadan drains the family budget, strains the national economy (due to the rise in food imports, particularly of dried fruits and nuts from Turkey, Syria and India), depletes Egyptians' savings and ruins their health. To compound matters, Ramadan, this year, coincides with the beginning of school, putting an additional strain on the Egyptian family budget, especially that of limited income families. Many of these are certain to find themselves encumbered by debt after the month draws to a close, largely due to careless spending.

The media offers a second type of testimony to the way we have come to celebrate Ramadan. One only has to open the several pages of TV guides in one's daily newspaper to appreciate the vast numbers of made-for- Ramadan TV serials, comedy programmes, celebrity talk shows, not to mention the phone-in contests and games that are aired throughout this month. The Egyptian television audience has a choice between more than 40 Egyptian or Arab serials broadcast over satellite networks. There are enough serials, alone, to take the viewer twice around the clock within a single day; enough to indicate beyond a doubt that Ramadan has become a month dedicated solely to entertainment and amusement. Evidently some quarters have begun to plead for a reduction in the numbers of programmes especially produced for television and the radio for this month because such is the glut that some producers have found it extremely difficult to find scheduling for their products during prime time. This applies in particular to the production sector of the National Radio and Television Broadcasting Company, the Cairo Company for Audio- Visual Production, and other such public companies that do not work jointly with private sector firms. From a practical and economic standpoint, all that time spent in front of the television until the early morning hours obviously diminishes one's competence and productivity at work during the daytime in Ramadan.

Which brings us to the third feature of the way we celebrate this month. So little value is given to work during this month, at least in the various government departments and agencies, that one might think that a whole class of civil servants, regardless of rank, regard Ramadan as the month of licensed indolence. Employees report to work late and/or sign out early on the grounds of their weariness due to fasting, and whoever dares object is treated to the growl, "Don't ruin my fast!" The labourer, engineer or physician who is diligent and conscientious at work is many times better than the man who prays, fasts and recites his Quran without putting their meanings into practice. This is precisely what the mufti of Al-Azhar, Sheikh Mohamed Hussein Tantawi, meant when he cautioned government employees against using fasting, prayer or reading the Quran as a pretext for not doing their jobs and hampering the welfare of the people.

A fourth phenomenon is the proliferation of mawaed al-rahman -- the banquet tables for the poor that are sponsored by MPs, business magnates, cinema celebrities and sports stars. The global economic downturn has not hampered the spread of these tables, which feed some three million people but which, at an estimated cost of around LE3 billion, have turned into something that blends ostentatious piety with status exhibitionism and politicking, as opposed to morally inspired charity. Recently the governor of Alexandria called for the abolishment of the mawaed al-rahman so that the money spent on them could actually be channelled to help the poor and the needy. Equally perturbed by the phenomenon, former mufti Nasr Farid Wasil said, "There is nothing wrong with the mawaed al-rahman per se, from the point of view of Sharia law. What is wrong is the extravagance that is lavished on them. We hear now of 'five-star' tables, when all that a Muslim should need to break his fast is some dates or a glass of juice and a little food."

In other words, instead of serving as a means to strengthen social cohesion the banquet tables have become an excuse for conspicuous spending.

Much has been written about the adoption of unhealthy eating habits during Ramadan, but another important issue is why people simply stop exercising during Ramadan, particularly when heavy Iftars and over-eating on social occasions is a given.

“Ramadan is one of the best times to lose weight but Saudis and expatriates both adopt unhealthy habits, due in part to a lack of awareness about sport and physical activities,” remarked Mohammed Barnawi, a physical education instructor and Dietician, in an interview with Saudi Gazette. “Continuing an exercise regime in Ramadan is a strong means to maintain health and balance, but people are less willing to do any physical activity during Ramadan, so they pack on the kilos.”

Exercise, is therefore a must during Ramadan, but it is also important to keep the workout on a low profile while fasting. Undertaking a strenuous exercise regime can cause health problems like headaches, vomiting, dehydration and dizziness.

It doesn’t make sense to start pounding on the treadmill, for instance. “One can lift weights while fasting, and another option is skipping rope, which is an effective form of cardiovascular exercise,” said Dr. Barnawi. “It is also great at burning fat, increasing stamina and coordination, as well as the firming muscles in the shoulders and limbs.” The most convenient form of exercise, however, is to go for a 30-minute walk. When is the ideal time for working out during the day in Ramadan? Just after Suhoor or two hours before Iftar are both good times for working out during the fast, according to Dr. Barnawi. “Exercising two hours before Iftar is the best technique as it restores energy in the body,” he explained. “If someone opts to work out in the morning, then eating a late and substantial Suhoor is advised.”

Working out after Iftar is also possible, for those unwilling or unable to exercise during their fast. “Anyone who intends to exercise after Iftar should eat some dates, drink plenty of water and perhaps have some soup and then head off for the work out,” explained Mohammed Siddique Al-Ansari, the Imam of a mosque in Riyadh. “This way the body can build up more stamina.” For those used to having a large meal with their family for Iftar, it is also possible to work out after the Taraweeh prayers, as that helps to digest the large Iftar meal, he added.
Posted by Zafar Khan at 18:42