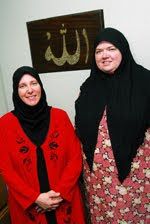 As Oklahoma’s Muslim community observes the fast of Ramadan this month, they are also taking time to reflect on the growth of their community statewide.

There are currently five mosques in the Oklahoma City metro area, including one in Norman and one in Edmond. Some of the growth has come from immigrants from south and central Asia as well as the Middle East, but there has been a surprising surge in converts from two other demographics: white females and Hispanic families.

White women are the most numerous converts this past year, followed closely by Hispanic families, said Saad Mohammad, a spokesman for the Islamic Society of Greater Oklahoma City (ISGOC).

“Islam is the fastest growing religion in the world,” he said, “and we’ve had a rush of new converts this year.”

Mohammad said the converts are typically families or, in the case of the white women, spouses of Muslim men. He said they’ve had some growth among young people, the youngest being a 19-year-old female student.

“According to the stories I hear, women are converting because they love the message of peace in Islam, as well as the emphasis on family, the tight-knit community and the treatment of Muslim women and wives.”

It is difficult to accurately report the number of Muslims in Oklahoma, but Hashmi said the most recent numbers estimate between 30,000 and 50,000. “I think the number is closer to 30,000,” he said.

In order for Oklahomans to get to know Muslims in their community, the Institute of Interfaith Dialogue is inviting non-Muslim families to share dinner in the home of Muslim families as they break their daily fasts this Ramadan.

Additionally, Mohammad said non-Muslims are welcome to attend the celebration of Eid al-Fitr on Sept. 20. Eid al-Fitr is the end of Ramadan and is traditionally celebrated with gift exchanges and a community prayer. Mohammad said the event will feature food from Egypt, Pakistan and many other countries from around the world.

Read the complete article here.
Posted by Zafar Khan at 16:26