`Eid Al-Fitr Sunday in Most Countries 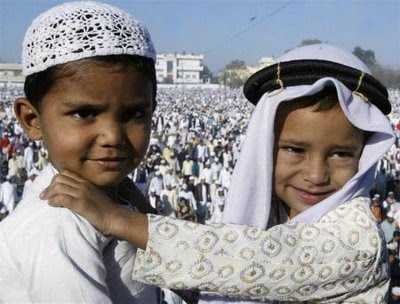 `Eid Al-Fitr, which crowns a month of fasting, prayers and Qur’an recitation, will start on Sunday, September 20, in most Arab and Muslim countries as well as in North America and Europe.

Saudi religious authorities confirmed the sighting of the moon of Shawwal, the tenth month of the Islamic calendar.

"Thus, Saturday is the last day of Ramadan and Sunday will be the first day of `Eid Al-Fitr," the Saudi Judicial Council said in a statement.

Similar announcements were made in the Gulf Cooperation Council members Qatar, Kuwait, Bahrain and the United Arab Emirates.

Authorities in Palestine, Jordan, Syria, Tunsia, Algeria, Yemen and Iran also confirmed Sunday as the first day of `Eid, which marks the end of Ramadan.

Iraq’s Sunnis will also celebrate `Eid Sunday, according to the Sunni Religious Authority.

Lebanon's Shiites and Sunnis will unite in celebrating the three-day `Eid.

In Indonesia, the world's most populous Muslim country, the Religious Affairs Ministry announced that Sunday will be the first day of `Eid.

The Muslim feast will also be celebrated Sunday in Malaysia, according to the Keeper of the Rulers' Seal.

The South Korea Muslim Federation said Muslims in the country will celebrate `Eid on Sunday.

In Japan, the Roue`t e Hilal committee also confirmed Sunday as the first day of `Eid el-Fitr, one of the two main Islamic religious festivals together with `Eid Al-Adha.

The Islamic Religious Council of Singapore (MUIS) announced on its website that `Eid will be on Sunday.

Thai Muslims will also celebrate `Eid on Sunday, according to the Provincial Islamic Religious Councils.

`Eid for South Africa’s Muslims will be on Sunday, according to Jamiatul Ulama.

Malawi Muslims will also celebrate `Eid on Sunday, according to the Muslim Association of Malawi.

In Australia, the Board of Imams of Victoria announced that the `Eid will be on Sunday.

Turkey had earlier announced Sunday as the start of `Eid based on astronomical calculations.

The European Council for Fatwa and Research (ECFR) earlier announced that the first day of `Eid will be in Europe on Sunday based on astronomical calculations.

The Islamic Society of North America (ISNA) also announced that `Eid will fall on Sunday.

The festivities and merriment start after special prayers to mark the day.

A few countries will celebrate the start of the Muslim feast on Monday.

Oman and Morocco announced that the moon of Shawwal could not be sighted on Saturday.

Thus, the first day of `Eid will be on Monday.

`Eid will also start in Mauritius on Monday, according to the Jummah Mosque Society.

Pakistan, Bangladesh, India and Afghanistan will sight the moon of Shawwal on Sunday. Thus, `Eid will fall either on Monday or Tuesday.

Moon sighting have always been a controversial issue among Muslim countries, and even scholars seem at odds over the issue.

This usually causes confusion among Muslims, particularly in the West, on observing the dawn-to-dusk fasting and celebrating the `Eid Al-Fitr.

“Milan Muslims are enjoying `Eid despite difficulties,” Ali Abu Shwaima, the director of the Islamic Center in Milan, told IslamOnline.net.

“`Eid is a time for joy and pleasure for all, elders and children, regardless of all difficulties and restrictions.”

`Eid Al-Fitr, one of the two main Islamic religious festivals, will fall in Italy on Sunday, September 20.

After special prayers to mark the day, festivities and merriment start.

The Milan Municipal Council turned down a request by Muslim leaders to hold the prayers at an affiliated sports center to accommodate the large numbers of Muslim worshippers.

The Council argued that the center is booked for a meeting of a political party during `Eid.

Muslim leaders have also sought to hold the prayers at an open playground of a local club.

"But the plans were shelved as weather forecasts tell of a rainy day on the first day of `Eid,” said Abu Shwaima.

Facing all these obstacles, Muslim leaders were forced to organize the `Eid prayers at the Islamic Center in Milan, which is not prepared to accommodate for the flow of worshippers during the prayers.

"We have no choice other than the Islamic Center," Abu Shwaima said.

"We will try to make the best use of every inch to accommodate the flood of worshippers who yearn to perform `Eid prayers."

Italy has a Muslim population of some 1.2 million, including 20,000 reverts, according to unofficial estimates.

Repeated clashes between government troops and Taliban militants are casting a pall over the joy and glamour of `Eid Al-Fitr in Pakistan’s restive valley of Swat.

The father of three recalls the traditional celebrations of Swatis of the advent of `Eid, which marks the end of the holy fasting month of Ramadan.

“If there is a heavy gunfire on the 29th day of Ramadan, the people of Swat would know that the `Eid moon was sighted,” he said.

“As soon as the moon was sighted, people would come out of their homes, and greet each other.

“But this time, nothing like that is going to happen.”

The Pakistani army launched a deadly offensive against the Taliban in Swat in April to uproot the militants from the region, killing around 2000 and arresting around 1000.

Though several Taliban commanders, including the local Taliban chief Maulvi Fazlullah, were taken into the army custody, clashes still rage in several areas across the region.

“Our area has been under curfew for last many days,” said Abdullah, a resident of Khuwazakhela, an epicenter of the fighting.

`Eid Al-Fitr is one of the two main Islamic religious festivals, together with `Eid Al-Adha.

After special prayers to mark the day, festivities and merriment start.

The Yemeni government announced Saturday, September 19, a halt of a military offensive against Shiite rebels in northern Yemen to mark `Eid Al-Fitr holiday.

"The government will cease military operations in the north western regions from this point forward," said a government statement cited by Reuters.

"The halt in operations comes into force at the time of publication of this communique" at 2:00 am, it added.

With Muslims worldwide are readying to sight the moon of `Eid Al-Fitr, mosques across Indonesia, the world’s most populous Muslim country, are finalizing preparation for `Eid prayers.

The mosque, which is expected to draw 100,000 worshippers, has been furnished for the Muslim festival, which marks the end of the fasting month of Ramadan.

The `Eid religious sermon and khateeb (the scholar who delivers the sermon) are also ready for the prayers.

Other mosques, including the Sunda Kelapa Grand Mosque in Menteng in Central Jakarta and Pondok Indah Raya Mosque in South Jakarta, also finalized preparations for the prayers.

Email ThisBlogThis!Share to TwitterShare to FacebookShare to Pinterest
Labels: Eid