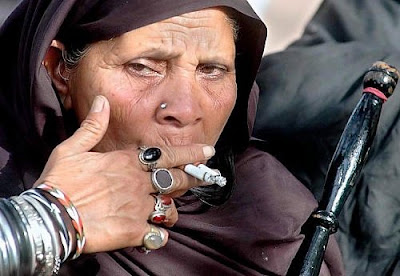 Shah Zareen, 45, has been smoking for most of his adult life.

But he is determined to emerge victorious from his painstaking battle against smoking during the holy fasting month of Ramadan.

"I will begin my mission from this Ramadan," Zareen, a juice shop owner, told IslamOnline.net.

Zareen, who smokes from 25 to 30 cigarettes a day, has already chalked out his plan to quit smoking during Ramadan with the help of his eight-year-old daughter Rozina.

"Of course, there will be no smoking during the fasting time. But after that whenever I have an urge, my daughter will give me a glass of water, which will help me maintain my will-power," he said.

"I don’t want to ruin my health any more."

Smoking is embedded in the culture of Pakistan, where tobacco consumption is on the rise despite government and NGOs efforts.

According to a survey by the Health Ministry's tobacco control department, some 40 percent of men and 8 percent of women in Pakistan are addicted to smoking.

A majority of them are chain smokers.

According to World Health Organization (WHO), over one million people die every year in Pakistan as a result of the use of tobacco in various forms.

Smoking did not exist during the time of the Prophet (peace and blessings be upon him), but our great religion of Islam has laid down general principles from which many laws are derived. From these principles, Muslim scholars have come to the conclusion that smoking is prohibited. A Muslim who smokes is ignorant of his religion and follows his lusts.

"One of the principles of Islamic jurisprudence is that all that is harmful and filthy is considered haram (forbidden).

There is enough scientific evidence to prove that smoking is harmful to one's health. Islam teaches us to take care of our health and not to destroy it. By smoking we are causing our own destruction, and Allah’s order in the Qur’an is clear: “Do not cause your own destruction” (Al-Baqarah: 195); “Do not kill yourself, for verily God is ever Merciful towards you” (An-Nisaa': 29).

Allah has prohibited us from squandering our wealth, and there is no doubt that smoking is sheer wastage of valuable resources. The money thus squandered on tobacco could very well rid the world of poverty — if correctly utilized.

As for the question why many Muslims still smoke, I cannot find any reason other than their sheer ignorance of Islamic teachings or their being carried away by their lusts.

One of the purposes of the institution of fasting in Islam is to help us break our bad habits and learn positive and life enhancing habits and thus equip us to face the challenges of life.

If, therefore, you fast and turn to Allah for assistance, you can overcome your smoking habit. Many people have overcome such bad habits through fasting. So many of them have quit smoking cold turkey during the month of Ramadan after being addicted to it for ten to twenty years or even more; they have never turned back.

You can also do the same, but before doing that you must summon enough courage and inner strength by talking to yourself about the negative aspects of smoking. No one can quit any bad habit if he still continues to glamorize it deep in his heart. It seems you are conditioned to thinking that smoking is great. So take yourself out of this habit by consciously visualizing all of the negative things about smoking you can think of as well as picturing all the pain, suffering (cancer, etc.) that it entails. Also, think of the valuable resources you are squandering which could have been used to feed many who are deprived of even the most basic necessities of life.

After having convinced yourself and created enough self motivation, turn to Allah and concentrate on dhikr (remembrance of Allah). Thus every time you are prompted to light a cigarette, cancel that thought by repeating subhan-allah (Glory be to Allah), al-hamduli-llahi (Praise be to Allah), Allahu akbar (Allah is most Great). Plead to Allah to grant you enough strength to master this monster. He will surely help you. Imagine that what you are praying for is already given to you. If you are sincere, you will be rewarded in your efforts. Islam is hard, and yet it is easy for those for whom Allah has made it easy. You can expect Allah to help you if only you turn sincerely to Him and surrender yourself to Him.