Israel's Arabs right to call for a strike 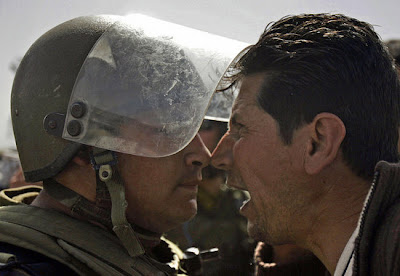 The announcement that the Israeli Arab leadership is calling for a general strike next month demonstrates the further deterioration of relations between the authorities and the beleaguered Arab citizens of the state. The 1.3 million Arabs living within Israel's borders have never had the most cordial of relationships with the country's rulers, and in the wake of the hard-right coalition's election victory the gulf has grown even wider – culminating in the symbolic protest set for 1 October.

The date chosen is no accident: it marks nine years to the day since 13 Israeli Arab demonstrators were shot dead by Israeli police during a previous general strike – a set of killings that left societal scars that remain unhealed almost a decade later. The government's latest set of proposals – such as the plan to ban the word "nakba" from school textbooks, and to link schools' funding to their success rate in sending students to enlist in the army – have rubbed salt into wounds that continue to fester throughout the Arab community, culminating in the decision to down tools and speak out against their treatment.

The sense of disenfranchisement felt by the Israeli Arab minority is, according to academic Bernard Avishai, a problem too serious to be swept under the carpet by Israel's leaders. Action must be taken, he urged, "to prevent a terrible intifada", fearing a mass explosion of tension that will dwarf anything that's gone on "in Gaza and the West Bank".

"Israeli Arabs live in townships on the edge of Israeli cities; their intellectual elite go to Israeli universities and assimilate, while those not in those circles join drug gangs and jihadist cults." He said that the Israeli Arab community expects to be treated as "full citizens of this country, nothing less" and unless this happens, tensions will spill over onto the streets.

The anti-Arab bias of senior Israeli politicians and military figures is well documented, and causes far more concern to the Israeli Arab community than the equally insidious behaviour of radical settler leaders and their cohorts. Unsavoury as the likes of Baruch Marzel and his merry men may be, their actions can in part be dismissed as the rantings and ravings of extremists living on the fringes of society. However, when similarly racist and discriminatory calls to arms emanate within mainstream Israeli society – from the upper echelons of power all the way down to street level – it is little wonder the Israeli Arab leadership take the situation so seriously.

Last month, foreign minister Avigdor Lieberman took aim at Ahmed Tibi, an Arab member of the Knesset and leader of the Arab nationalist party in Israel. "Our central problem is not the Palestinians," declared Lieberman, "but Ahmed Tibi and his ilk: they are more dangerous than Hamas and [Islamic] Jihad combined." Such incendiary talk is nothing new for Lieberman; in November 2006 he ratcheted up tension by comparing Israeli Arab nationalists with Hitler and his henchmen: "The heads of the Nazi regime, along with their collaborators, were executed. I hope this will be the fate of the collaborators in the Knesset."

His proclamations are, quite rightly, denounced by those who recognise the menace latent in his words. "When the foreign minister says that, ordinary Israelis understand that he is calling for me to be killed as a terrorist," said Tibi in relation to Lieberman's recent outburst. "It is the most dangerous incitement." Politicians lead by example, and Lieberman knows full well the impact the statements he makes can have on the man on the Israeli street.

Israeli Arabs have good reason to believe that they will never be fully accepted by Israeli society, despite assertions to the contrary on the part of more conciliatory and diplomatic members of Israeli officialdom. The proof is not simply the unabashed racism of the likes of Lieberman and Aharonovitch, nor the paucity of state provision of basic services in Arab towns and cities compared with the funding given to their Jewish counterparts.