It's certainly not unusual to spot billboards in Silicon Valley urging you to step into Fry's Electronics, shop at the Great Mall or buy a new Halloween costume.

But for the first time, billboards asking "Why Islam?" have sprouted up in San Jose, Santa Clara and Concord, along with a blitz of posters on buses and bus stops — a campaign to educate people about the religion and fight negative stereotypes. The ads offer free Korans and a toll-free number people can call to seek answers about the oft-misunderstood religion. 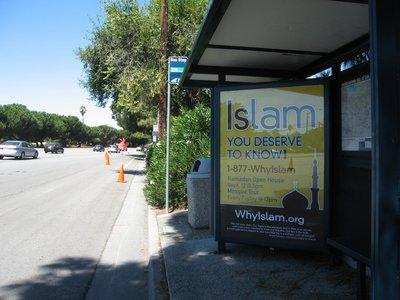 "The best-case scenario of this campaign would be to show the public that Muslims are hardworking, peace-loving family contributors," said Ahmed Khaleel, 30, of Santa Clara, the outreach coordinator for the Bay Area Chapter of the Islamic Circle of North America, which is sponsoring the "Why Islam" project. "Since Sept. 11, Islam has stood at the focus of negativism. Islam is not synonymous with terrorism."

The billboard campaign began in New York almost a year before the terrorist attacks of Sept. 11, 2001. Ironically, one of the campaign founders, Tariq Amanullah, died in the World Trade Center that day. 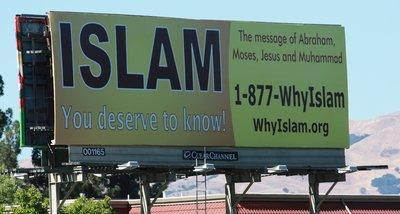 The message of the campaign is simply to show that Islam is quite similar to other religions.

To that effect, one of the billboards, along Interstate Highway 880 at Brokaw Road in San Jose, says Islam follows the teachings of "Abraham, Moses, Jesus and Muhammad.'' Some of the billboards are also in Spanish. (The billboards spell Quran with a "qu," though it's also commonly spelled "Koran.")

Each year, the billboard locations change slightly and are funded by local communities. For example, billboards dot highways in Chicago, Houston, Philadelphia, Boston, Tampa, Fla., and earlier this year in San Francisco. Neither the local nor national chapter of the Islamic Community of North America disclosed how much the entire campaign costs, or how many free Korans have been given away other than "in the thousands each year."

But Parkar did say that each billboard costs $1,000 to $5,000. Smaller ads may run between $200 and $500 apiece. There are four large billboards along highways in San Jose and Concord, eight bus-stop ads and posters in San Jose and Santa Clara, and 35 bus ads, according to campaign organizers. The ads began Aug. 31 and will run at least four weeks. Parkar said, on average, volunteers field 1,000 monthly calls to the 1-877-WHY-ISLAM hot line, and about the same number of e-mails to WhyIslam.org. In addition, Muslim communities also host open houses during the Ramadan-timed campaign. One such event is happening this evening at the South Bay Islamic Center in San Jose, and another on Saturday in Santa Clara at the Muslim Community Association.