Alcohol: Another week, another set of bad news 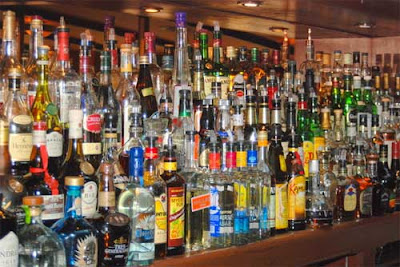 At Twincoz Bar, the clinking of beer bottles and the usual chorus of tusayukire wamu (cheers) has been deadened by a mournful mumble. Around the plastic tables of the roadside joint on the outskirts of Kampala, patrons talk of the scourge of sudden blindness followed by death.

In the past month, at least 40 Ugandans have died from drinking adulterated alcohol. In this unregulated east African country, believed to have the world's highest rate of alcohol consumption, the news is terrifying. The authorities appear helpless. Worst of all, no one seems safe.

"Since the death of DJ Ronnie, we know it can happen to anyone," said Twincoz owner Ruben Mugyeni. On 11 September, less than 24 hours after a night out with friends, popular radio presenter Ronnie Sempangi, 36, lost his sight, went into a coma and died from multiple organ failure. The late-night lonely-hearts presenter is thought to have unwittingly drunk lethal methanol. As one of the most-loved personalities in Uganda, thousands attended his funeral at Nanziga near Kampala.

In another research doctors have said that Cigarettes and alcohol will take 10 years off your life.

Doctors have for the first time quantified the effect of the three major killers of middle-aged men: smoking, high blood pressure and high cholesterol. Men who smoke and fail to give up, or to control their blood pressure and cholesterol (where necessary) are sacrificing 10 to 15 years of their lives.

Results from the 40-year Whitehall study, landmark research into 19,000 civil servants begun in the late 1960s, shows that men who reached the age of 50 with all three risk factors lived on average to the age of 73, while those without any of the risks lived till 83. When other risks were included, such as diabetes and obesity, they found the least healthy lived until 70 on average, while the most healthy lived till 85.

Ryan and Tracey both suffered brain damage in the womb. Their adoptive mother, writing anonymously here, fears the children of Britain's bingeing generation face a life of emotional trauma

When Martin Narey, chief executive of the children's charity Barnardo's, called for many more children to be taken into care at birth to stop them being damaged beyond repair by inadequate parenting, I thought of Ryan and Tracey (not their real names), two of our three adopted children. Our son has just passed his 21st birthday in prison. He is on remand, awaiting trial for various violent offences. Tracey, his 19-year-old half-sister, is doing better. But if she were not living at home, she would undoubtedly be putting herself in dangerously threatening sexual situations. She is simply not capable of living safely on her own.

Through the arduous and harrowing process of raising them, we have come to realise that children can be "damaged beyond repair" long before they are born. And the cure may require of society much more dramatic policies than merely taking babies away from inadequate parents.

We adopted Ryan as a one-year-old, a frail little chap who had been taken into intensive care because his birth mother had badly neglected him in the first couple of weeks after he was born. He had been fostered for almost all of his short life. The social workers told us that his mum "had learning difficulties" and had been abusing alcohol and illegal drugs.

The posters, on hoardings across France, show a slightly dishevelled media executive in his 50s, on a jetty, a bag in his hand, a Swiss lake behind, staring with vacant, battered, tired eyes into the middle distance.

He is an unlikely hero, but Hervé Chabalier, author of the book One for the Road (Le dernier pour la route), was being lauded by French journalists last week after a film based on his battle with alcoholism came out to critical acclaim. "Truthful, clear and sober," said the Nouvel Observateur weekly magazine. A story that is "profoundly human", said the mass-circulation daily Ouest-France.

But the film, in which Chabalier is played by François Cluzet, has gone beyond simple entertainment, provoking an unprecedented debate on alcoholism, long a taboo subject in France.

Chabalier, 67, founder of the press agency Capa and a renowned foreign correspondent, has not drunk for seven years since the treatment for alcoholism on which the film is based. He said that there was "denial" of the problem in his native land.

"Everywhere you are pushed to drink. It is a very strong social symbol. For having fun, for crying, there is alcohol. It is part of France. But the moment it goes too far, then you are cast out," he told the Observer. "People don't want to talk about it or recognise it."

Though the French are often seen, and see themselves, as a nation of moderate drinkers, certainly compared with Britons, statistics reveal similar levels of alcohol consumption and dependence. According to Inserm, a French public health research centre, five million French people have medical, psychological or social problems linked to alcohol abuse and at least two million are dependent – levels comparable with anywhere in Europe.

The first declaration made by the Prophet (peace and blessings be upon him) concerning this matter was that not only is Khamr (wine or alcohol) prohibited but that the definition of Khamr extends to any substance that intoxicates, in whatever form or under whatever name it may appear. Thus, beer and similar drinks are haram.

And `Umar (may Allah be pleased with him) declared from the pulpit of the Prophet (peace and blessings be upon him) that "Khamr is that which befogs the mind." (Reported by Al-Bukhari and Muslim.)