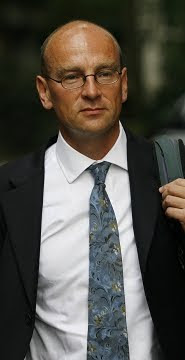 A senior Foreign Office civil servant was today facing the sack after being convicted of racially aggravated harassment.

Rowan Laxton, who heads the South Asia desk, launched an expletive-ridden tirade against Israel and Jews as he worked out at a London gym.

A court was told the 48-year-old shouted: "Fucking Israelis, fucking Jews" as he watched a television news report about the death of a Palestinian farmer.

His fellow gym members Gideon Falter and William Lemaine overheard him and complained to gym staff. Falter claimed he also heard Laxton say: "If I had my way, the fucking international community should be sent in and if the Israelis got in the way, they'd be blown off the fucking earth."

Lemaine said: "No-one really expects to hear those words being uttered and when you do, you take a note of it."

The incident, which happened during the conflict in Gaza last January, was described by Laxton's lawyer as a "moment of madness".

"It is a cliche, but it's a cliche that fits in this situation," Julian Knowles told Westminster magistrates court. "It was a moment of madness for Mr Laxton, which is going to have very grave and long-term consequences. The real punishment is yet to come."

Laxton, who earns £3,000 a month after tax, was suspended from his post after the outburst and could now be sacked.

Giving evidence, he said: "I am embarrassed, to be honest with you.

"I offended somebody, I embarrassed the Foreign Office, I've caused anxiety to a number of friends and family and, in particular, I regret using foul language and I regret using imprecise language.

"I regret very much the way in which this case came out in the media and the suggestion that I am antisemitic or racist in any way. I am not."

He said he accepted that his comments suggested everybody in Israel was "somehow responsible" for the farmer's death.

District judge Howard Riddle, announcing his verdict, said that while Laxton's behaviour was "undoubtedly out of character", there was "no doubt" the words were "threatening, abusive or insulting".Laxton was fined £350 and ordered to pay £500 prosecution costs and a £15 victim surcharge. Knowles said his client was "very disappointed" with the outcome and would consider "his next steps with his legal team".

Laxton was suspended from his job earlier this year, and a misconduct hearing is likely to start this week.