This Middle East location is home to many people who are conservative and deeply religious, and apparently have a penchant for outrageously sexy negligees.

The Souk al-Hamidiyeh is the largest and most famous marketplace in Damascus, Syria. Here, shoppers can find lingerie with feathers, crocheted bodysuits and edible bikinis. Some of the pieces light up; others play songs like Old MacDonald Had a Farm.

In The Secret Life of Syrian Lingerie, graphic designer Rana Salam and journalist Malu Halasa, who covers the culture and politics of the Middle East and now lives in London, give us a peek into part of the Muslim world not often heard of, or seen, in the West.

''There's an idea that because it's Islam, they don't have sex,'' explained Halasa, who is a co-author of several other books and writes for the British press. ``We cannot make assumptions about the private lives of Muslims.''

Lingerie is a luxury item in Syria. Halasa doesn't suggest that the women are wearing racy panties beneath their burqas; they are worn at intimate moments. When a woman gets married, she often collects up to 30 outfits for her wedding night. They are gifts to herself and from folks like her mother, future mother-in-law and groom.

The lingerie represents a rite of passage from virginity to respectable, married womanhood.

''Some Syrian women think that buying lingerie is a waste of money and it has no role in their sexual lives. While for some traditional people, it is a must to buy lingerie with all different colors and styles before getting married,'' an unidentified woman says in the book. ``I think that not being able to wear what you want in daily life is a factor, which makes some girls feel that only marriage will give them the chance to show.''

While Middle Eastern women are often seen in public wearing drab colors, what goes on behind closed doors might be a different story. Flamboyancy is reserved for the home, where clothing can be bright, cheery and sometimes tantalizing. 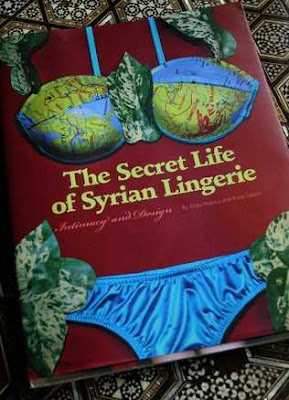 ''There has to be laughter in the bed. If the man doesn't make the woman laugh, the sex is dead. The more she laughs, the better the sex,'' he said. ''If Syrian lingerie didn't exist, sex would be boring.'' A sense of humor will come in handy, because some of the outfits are, well, tacky. You can find thongs with singing Tweety Birds and plastic cellphones attached to the crotch.

''The underwear makes me laugh so much. It is not sexy at all! At least, I don't think so,'' remarked another unidentified woman in the book. ``It is so old-fashioned and mirrors the very old-fashioned ideas about sexuality in the less educated classes of Syria.''

The visually driven 176-page book explains lingerie's role in the Arab world with a rare behind-the-scenes look at the industry, a filmmaker's diary of shooting a lingerie documentary in Syria, frank talk from Syrian women about what part undergarments play in their lives, and an interview with a former fundamentalist. It's complete with unretouched photographs of women modeling the lingerie 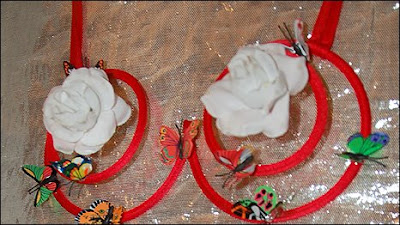 "Doesn't matter whether you wear a miniskirt or a hijab, it takes a certain amount of chutzpah to put on some of those outfits," Halasa said in a recent phone interview with Haaretz. "Rana and I ended up admiring those women, and we thought some women in the developed world could use a little joy like that in their lives."

Asked to elaborate, the author said she'd be most amused if Kadima leader Tzipi Livni slipped into something more comfortable: "She could consider working out her excess energy in sex rather than F-16 air attacks."

Halasa, an American-born journalist whose father is Jordanian-Palestinian, and Salam, a graphic and interior designer originally from Lebanon, largely avoid the Arab-Israeli conflict in their book. Not because they don't have strong political opinions; Halasa's Livni wisecrack is hardly ambiguous; but more likely because United Nations resolutions are irrelevant on one's wedding night. Demilitarized zones give way to erogenous zones when these "indoor clothes" are revealed. 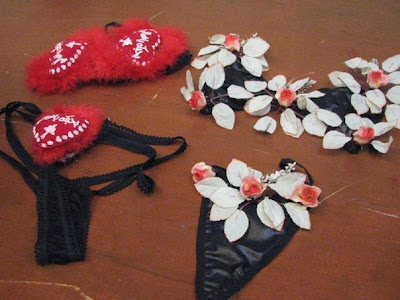 Syria, which ranks fourth in the world in organic cotton production, is far from monopolizing lingerie manufacturing in the belly-dancing region. Egypt has a thriving exotic undergarment industry, and both Israel and Jordan have factories for Victoria's Secret. But Syria's niche brand, created by a few sewing machines at a time in Damascus basements, stands out for its humor and offbeat imagination. One innovative fashion is called "The Curtain," a wire frame with retractable drapes covering a woman's privates.

Just off the crowded central market in Old Damascus, a sales assistant called Mahmoud is giving me my first introduction into an unusual Syrian speciality - musical knickers.

The garments come in many different shapes and colours, and play little tunes - or other extraneous noises like telephone ringtones - all made by small electronic devices hidden in the lining.

Singing underwear isn't the only item on sale at the "Fatin Shop for Ladies Indoor Clothing", where Mahmoud is proudly showing off his product lines.

He's got knickers with flashing fairy lights, others that glow in the dark, a bra-and-knickers set shaped like manicured women's hands enveloping the wearer's crotch and breasts.

In a slightly higher price range, he's got remote-controlled bras and knickers, designed to spring open and fall to the floor with a clap of the hands or a press of a button.

In Damascus, I paid a call on one of Syria's most established lingerie makers, Ali Nasser, in his cramped workshop in the Sheikh Saad neighbourhood.

I'm amazed how fast a brand new red satin bra and g-string takes shape from his old sewing machine - his expert eye and skilful hands honed by more than 30 years in the business.

A red feather boa - chicken feathers, imported from China - is then snipped up and bits of it glued on to the satin, a canvas for the next stage, toy birds and fake flowers, and of course hidden electronic music devices.

In other cultural contexts, this might seem something like a den of smut and vice - but Mr Nasser, a devout Muslim, insists it's more a public service and religious duty.

"Our work is all about igniting the desires of a husband for his wife, so he doesn't go looking elsewhere. It's a good thing and there's nothing wrong it."

"There's no shame in religion," he adds, as another tiny, shiny g-string shoots out of Mr Nasser's sewing machine.