Middle East in trouble due to low Oil prices 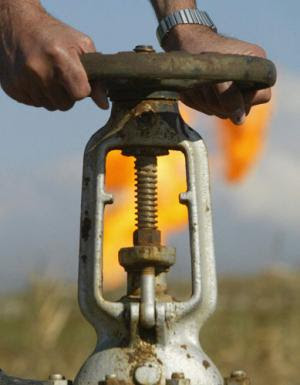 Apparently, Iraq is in trouble because the Oil prices have collapsed dramatically.

Six years after the invasion that toppled Saddam Hussein, the collapse in the price of oil is devastating Iraqi hopes of reconstructing an economy shattered by 30 years of war and sanctions. A year ago, as the price of oil approached $150 a barrel, Iraqi leaders were optimistic they would have enough money to rebuild the country.

Since then the price of a barrel of oil has slid to just $50 a barrel, leaving Iraq, on the sixth anniversary of the US-led invasion and the overthrow of Saddam, facing what one official in Baghdad called a "catastrophe".

The oil shock also presents the US President, Barack Obama, with a fresh headache, threatening to complicate his plans to restore stability to the country and withdraw US troops. Not only is there too little money for reconstruction, there is not enough to maintain and expand the oil industry, the government's only source of revenue.

Meanwhile, Gulf states are gearing up for life after fossil fuels

Alongside the development of aviation hubs, financial services and free-trade zones, states in the region are also concentrating on becoming international centres of hi-tech research and development, based on the Western model of the science park. So some of the world's largest transnational corporations including Shell, Microsoft and General Electric (GE) are in Doha today for the formal opening of the science park Qatar hopes will secure its place as a world centre of research.

The futuristic architecture houses laboratories, training facilities and office space for research in fields considered central to the diversification of the tiny state's economy – energy, health, environment and IT. Private sector participants including Total, Chevron, EADS and Rolls-Royce are among the 21 companies that between them have already committed to project funding of $225m over five years, which will be matched by the Qatar Foundation that oversees the QSTP. The park will house the first stem-cell bank for the Middle East.

The research facilities are next door to Qatar's "Education City", a 14 million sq m, newly built campus. The plan is for an education system allied with applied, commercial research.

One has to be careful though about jobs in the Middle East nowadays. With oil prices collapsed the economies are in doldrums.

Lured by the promise of a well-paid investment banking job in the growing markets of the Gulf, Ghassan Darwiche left Lebanon for Qatar in 2005.

He landed a banking job in Qatar and then started working at the Standard Chartered Bank in Manama, Bahrain in 2007.

In 2008, he transferred to the wealth management department.

He believes the move was a logical one because of the Gulf's prospering economy; global oil and gas prices were high and investment in the banking and real estate markets showed continued growth.

However, by January 2009, the department had became a "loss entity" for the bank.

"People were pulling out money because of the global financial crisis," he said.

The bank then downgraded his department to commercial banking – credit card and insurance applications. Darwiche believed that he was being demoted and quit.

"We all want to climb the ladder. The Arab and European staff left, but the Indian banking professionals tended to stay and accept the downgrade. I didn't want to go backward in my career," he said.

However, three months after arriving in Beirut and finding no job opportunities for someone with his skills, Darwiche believes he would have fared better had he stayed.

"I'm one of the many victims of the financial crisis but the question now is what to do next."

According to Lebanon's finance ministry, there are some 350,000 Lebanese people working in the Gulf states, which in the past decade had become popular employment destinations.

However, with world markets in recession and foreign investments dwindling, fortunes have been reversed; the ministry says 15,000 Lebanese expatriate workers have returned in recent weeks.

They can be seen at bars and coffee shops in Beirut, lamenting about their newfound joblessness, finding solace among others in the same situation.

May Allah help all our brothers and sisters in this period of difficulty. Amen.
Posted by Zafar Khan at 11:33