The crime of speaking truth in Iraq 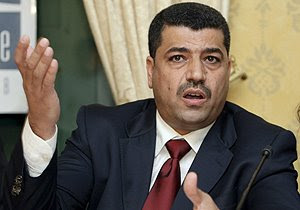 Robert Fisk asks a very important question in the Independent:

Where is Mohamed al-Dainy? In prison in Baghdad? On the run? Or is this Sunni Muslim Iraqi member of parliament and human rights defender facing torture or even death in his own country? Certainly that is what his brother Ahmed fears. "We are afraid for his life and the lives of our family members in Baghdad," he says from the safety of Damascus. "The whole family fears they are in direct threat from the Iraqi government."

Prime Minister Nouri al-Maliki's government denies that it has arrested or imprisoned the disappeared man – even though government agents tried to detain him at Baghdad airport on 25 February after his flight to Amman was ordered to return to Iraq when it was almost halfway to Jordan with an Iraqi parliamentary delegation.

The authorities have alleged that he planned a suicide bombing in the Iraqi parliament on 12 April 2007, which killed eight people including a colleague from his own political party, a claim that the Geneva-based human rights group Alkarama, which is also fearful for Mr al-Dainy's safety, says is "politically motivated" because of the missing man's exposure of secret prisons and torture in Iraq.

Many Iraqis have stories of illegal prisons, mistreatment and even rape by security forces nominally controlled by al-Maliki's government – some true, some highly exaggerated – but Mr al-Dainy is a respected human rights investigator who last year flew to Geneva as a guest of Alkarama, which covers the Arab world, to discuss his work with UN officials, the International Red Cross and several NGOs. In Switzerland, he presented a 16-minute documentary which included video footage he had himself taken in "secret" prisons.

His disappearance last month was as frightening as the charges laid against him by the government. After his flight returned to Baghdad airport, government agents boarded the aircraft and formally arrested Mr al-Dainy in front of his fellow parliamentarians and other passengers. First reports said that he was taken from the airport in a convoy of security vehicles. Later information suggested that he left the airport with fellow MPs and asked to be let out of his car on the airport road to avoid arrest at a government checkpoint. Mr al-Dainy's bodyguards were supposedly arrested for their part in his "escape".

Those close to his family suggest that he was captured and detained in the Kadimiya prison, then later transferred to Jadriya jail, although the authorities deny all knowledge of this. Family members say security forces have raided their homes in Baghdad and that the missing man's 85-year-old father has been arrested. Mr al-Dainy denied government claims of involvement in the 2007 suicide bombing, saying that a nephew and his own senior security guard had been tortured before "confessing" on television that he had been behind the killings.

Alkarama believes the whole affair started after Mr al-Dainy issued a statement in Geneva on 30 October last year in which he appealed for international help to end the suffering of Iraqis held in prisons across the country. "Through my work, I have access to many official documents," he said. "I have many people and officials from within the government secretly giving me documents ... I have many, many documents from official ministries which confirm extra-judicial killings in the detention centres, the problem of systematic rape in the women's prisons and about the ... human rights situation in Iraq."

In more detailed allegations, Mr al-Dainy stated that 26,000 people were detained by US forces in Iraq – but that a further 40,000 are held in 37 official government-controlled prisons. "In one secret prison I visited, hundreds of prisoners were crammed into each of the six rooms. There are all kinds of people, men, women and children. In one prison, there were 23 minors." He condemned the UN Assistance Mission for Iraq (Unami) as ineffective and complained that officials wanting to investigate human rights abuses were not being granted permission to visit prisons.

Mr al-Dainy, like many other Sunnis, is highly critical of Iranian involvement in Iraq and warned officials in Geneva of Iran's influence over the Maliki government – but he says that he himself managed as an MP to visit 13 jails, three of them jointly controlled by US and Iraqi forces. "I'm an MP and this puts me in danger," he told his audience in Geneva. "But I'm going back to Baghdad and it will not stop us."

Prescient words. As his brother Ahmed al-Dainy told The Independent: "We can do nothing with the government because they are refusing to talk or deal with us. Any contact we make, by phone or in person, is cut off immediately.

"The most important work that can now be done is from international human rights organisations and whatever international pressure can be put on the Iraqi government."
Posted by Zafar Khan at 22:40