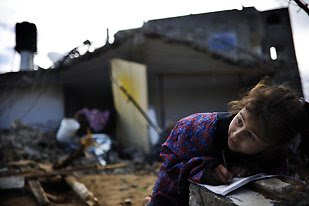 An investigation by a group of former Israeli soldiers has uncovered new evidence of the military's conduct during the assault on Gaza two months ago. According to the group Breaking the Silence, the witness statements of the 15 soldiers who have come forward to describe their concerns over Operation Cast Lead appear to corroborate claims of random killings and vandalism carried out during the operation made by a separate group of anonymous servicemen during a seminar at a military college.

Although Breaking the Silence's report is not due to be published for several months, the testimony it has received already suggests widespread abuses stemming from orders originating with the Israeli military chain of command.

The claims appear to add credence to widespread claims of Israeli soldiers firing on civilians, made by Palestinians to journalists and international investigators and lawyers who entered Gaza at the end of the conflict and in its aftermath.

With Israeli newspapers threatening new disclosures, the New York Times has weighed in with an interview with a reservist describing the rules of engagement for the Gaza operation. Amir Marmor, a 33-year-old military reservist, told the newspaper that he was stunned to discover the way civilian casualties were discussed in training talks before his tank unit entered Gaza in January.

"Shoot and don't worry about the consequences" was the message from commanders, said Marmor. Describing the behaviour of a lieutenant-colonel who briefed the troops, Marmor added: "His whole demeanour was extremely gung-ho. This is very, very different from my usual experience. I have been doing reserve duty for 12 years, and it was always an issue how to avoid causing civilian injuries. He said that in this operation, we are not taking any chances. Morality aside, we have to do our job. We will cry about it later."

Haaretz quoted one soldier as saying: "There was a house with a family inside ... We put them in a room. Later we left the house and another platoon entered it, and a few days after that there was an order to release the family. They had set up positions upstairs. There was a sniper position on the roof."

"The platoon commander let the family go and told them to go to the right. One mother and her two children didn't understand and went to the left, but they forgot to tell the sharpshooter on the roof they had let them go and it was OK, and he should hold his fire and he ... he did what he was supposed to, like he was following his orders," it said.

Terming all Palestinians in the Gaza Strip as "terrorists", Israeli army rabbis have told troopers in the recent Gaza war that they were fighting a religious war to expel gentiles from the holy land.
"Their message was very clear: we are the Jewish people, we came to this land by a miracle, God brought us back to this land and now we need to fight to expel the gentiles who are interfering with our conquest of this holy land," Ram, an army commander, said in testimonies cited by the Israeli daily Haaretz on Friday, March 20.

"This was the main message, and the whole sense many soldiers had in this operation was of a religious war."

The accounts of Ram, a pseudonym to shield the officer's identity, was published in the second day of troops' revelations about Gaza war atrocities.

Ram said his impression of the war was "the feeling of an almost religious mission".

"A brigade rabbi was there, who afterward came into Gaza and went around patting us on the shoulder and encouraging us, and praying with people," he said.

"And also when we were inside they sent in those booklets, full of Psalms, a ton of Psalms. I think that at least in the house I was in for a week, we could have filled a room with the Psalms they sent us, and other booklets like that.
The army Cops distributed pamphlets about the history of Israel's fighting in Gaza from 1948 to the present, he said.

"The rabbinate brought in a lot of booklets and articles."

A squad commander from Ram's Givat Brigade, named as Aviv, recounted how they were told to open fire on any Palestinian who has not left his home during the war.

"From above they said it was permissible, because anyone who remained in the sector and inside Gaza City was in effect condemned, a terrorist, because they hadn't fled," he said.

"I didn't really understand: On the one hand they don't really have anywhere to flee to, but on the other hand they're telling us they hadn't fled so it's their fault ... This also scared me a bit."

During the event, the order was amended to include "operating megaphones" so advancing troops could tell people they had five minutes to get out or be killed.

"And then there was a very annoying moment. One of my soldiers came to me and asked, 'Why?' I said, 'What isn't clear? We don't want to kill innocent civilians.' He goes, 'Yeah? Anyone who's in there is a terrorist, that's a known fact.' I said, 'Do you think the people there will really run away? No one will run away," Aviv said.

The European Union has been urged to call for an independent inquiry into possible war crimes committed during Israel's 22-day military offensive in Gaza.

Human Rights Watch (HRW) wrote to EU foreign ministers to seek their backing for an inquiry into its "allegations of serious violations of international law [by Israel and Hamas]... which may constitute war crimes". The Palestinian Centre for Human Rights estimates that 1,434 Palestinians, including 960 civilians, were killed in the offensive.

HRW says it has documented six cases in which troops fired on groups of Palestinians holding white flags. And it claims Israel used an "unjustifiably expansive definition" of military targets to attack civilian facilities connected to Hamas.

The letter accused Hamas and other Palestinian groups of committing war crimes by launching hundreds of rockets into Israel, killing three Israelis since 27 December. It says Hamas's use of civilian homes and areas to monitor or attack Israeli forces violates requirements to protect civilians.
Posted by Zafar Khan at 12:06