Israel: Stones for 'sinful buses' and thumbs up to 'modesty buses' 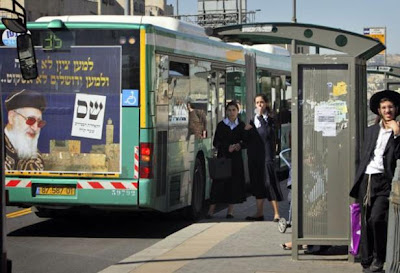 This is the kind of news I would expect from Taliban in Afghanistan but its good to hear that the same fervour is present in Israel as well.

It is an all too familiar scene: the Israeli bus, travelling near predominantly Palestinian East Jerusalem, is pelted with stones that smash windows and startle passengers. Except this time the stone-throwers are not Arabs but Jews. The violence is part of an unholy war in which strident elements of the ultra-Orthodox community in Mea Shearim are trying to force Israel's leading bus company – and, by extension, Israeli society – to defer to their strict religious teachings and sensibilities.

Although Israel defines itself as a Jewish state, what that means in practice is subject to dispute, with religious and secular Jews constantly tugging for greater clout in shaping the character of the country. The latest battle is over demands that buses segregate men and women in accordance with strict Jewish law on a line connecting the ultra-Orthodox stronghold of Mea Shearim in Jerusalem with the Western Wall. In the view of some ultra-Orthodox Jews, segregated seating, with women entering separately through the rear door and sitting at the back, is vital to uphold their stringent traditions stipulating modesty and prohibiting physical contact with members of the opposite sex.

Secularists say the push for sanctity on the buses is part of a larger effort to transform Jerusalem into a kind of Tehran. The violence is a major test for Jerusalem's new Mayor, Nir Barkat, who rode to power last year on the votes of secular residents worried over growing ultra-Orthodox influence.

In a BBC report, couple of years back, the buses with segregation were referred to as 'modesty buses'.

The other day I was waiting for a bus in downtown Jerusalem. I was in the bustling orthodox Jewish neighbourhood of Mea Sharim and the bus stop was extremely crowded.

When the Number 40 bus arrived, the most curious thing happened. Husbands left heavily pregnant wives or spouses struggling with prams and pushchairs to fend for themselves as they and all other male passengers got on at the front of the bus.

Women moved towards the rear door to get on at the back.

When on the bus, I tried to buck the system, moving my way towards the driver but was pushed back towards the other women.

These are what orthodox Jews call "modesty buses".

The separation system operates on 30 public bus routes across Israel.

The authorities here say the arrangement is voluntary, but in practice, as I found out, there is not much choice involved.

Naomi Ragen is one of a group of women now taking the separation bus system to court. She is an orthodox Jew herself.

"I wasn't trying to start a revolution, all I wanted to do was get home," she tells me.

"I was in downtown Jerusalem and I saw a bus going straight to my neighbourhood and I got on and sat down, in a single seat behind the driver.

"It was a completely empty bus, and all of a sudden, some men started getting on, ultra-orthodox men. They told me I was not allowed to sit there, I had to go to the back of the bus."

Not only is the segregation system discriminatory, says Ms Ragen, but it can also be dangerous, she says, for those like her who ignore it.

"I said to him look, if you bring me a code of Jewish law and show me where it's written that I have to sit at the back of the bus I'll move.

"And he tried to gain support from the rest of the passengers and I underwent a half-hour of pure hell - abuse, humiliation, threats, even physical intimidation."

Opponents of the separation buses face an uphill struggle. Orthodox Jewish leaders are a powerful minority in Israel.

Naomi Ragen says the buses are just part of a wider menacing pattern of behaviour towards women in parts of the orthodox Jewish community.

"In some places there are separate sides of the street women have to walk on."

She says that there are signs all over some religious neighbourhoods demanding that women dress modestly.

"They throw paint and bleach at women who aren't dressed modestly and if we don't draw a line in the sand here with this seat on a bus, then I don't know what this country and this religion is going to look like in 20 years," Ms Ragen said.